(Bloomberg) — President Donald Trump’s chief of staff and his national security adviser engaged in a profanity-laced argument outside the Oval Office on Thursday, according to three people familiar with the episode.

The chief of staff, John Kelly, and the national security adviser, John Bolton, fought over immigration and border crossings, including the performance of Homeland Security Secretary Kirstjen Nielsen, one person familiar with the matter said.

Bolton criticized Nielsen, a former Kelly deputy whom he advocated to replace him at the department. Trump sided with Bolton, the person said, which may once again stir speculation that Kelly will soon depart the White House.

Trump has lately expressed fury about a large group of migrants who are traveling from Honduras toward the U.S. border. He vowed Thursday to deploy the military and shut down the Mexican border unless the migrants are turned back.

The clash is an indication that tension is flaring in the White House 19 days before midterm elections in which Republican control of Congress is at stake. The shouting match was so intense that other White House aides worried one of the two men might immediately resign. Neither of the men is resigning, the people said.

Trump is aware of the argument, the people said, even though the president told reporters he didn’t know about it before boarding Air Force One to travel to Montana for a campaign rally. He has recently sought to make immigration a more prominent political issue, blaming Democrats for increased numbers of migrants crossing the border. 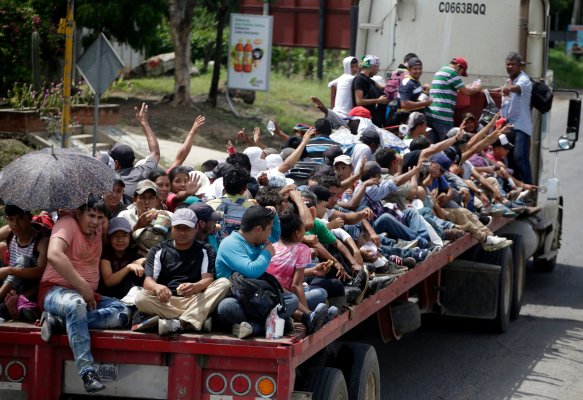 President Donald Trump Wants to Stop the Caravan. Here's What Experts Think Would Help
Next Up: Editor's Pick