Why the Release of Pastor Andrew Brunson Is a Good Sign for U.S-Turkey Ties

Freed American pastor Andrew Brunson prays for President Donald Trump at the White House in Washington, DC, October 13, 2018.
Roberto Schmidt—AFP/Getty Images
Ideas
By Soner Cagaptay
Cagaptay is a senior fellow at The Washington Institute for Near East Policy and author of The New Sultan: Erdogan and the Crisis of Modern Turkey.

Turkey’s release of American pastor Andrew Brunson from jail is a huge step forward for the U.S.-Turkey relationship.

It’s not been easy getting here. An August deal between U.S. President Donald Trump and Turkish President Recep Tayyip Erdogan for the pastor’s release fell through, angering Trump personally. At the time, Trump slapped sanctions on Turkey, contributing to a sharp decline in the lira. He also put a freeze on bilateral ties. I joked that Trump had effectively become the “Turkey desk officer” at the State Department—with the power to block everything.

Brunson was arrested on October 2016, on charges of allegedly being a spy and connections to terrorist groups working against Turkey. For some reporters, this was a sign of Erdogan increasing pressure on the U.S. in negotiations on issues, such as Turkey’s request for the extradition of Fetullah Gülen, a Turkish cleric who lives in the U.S. and whose network of followers many Turks believe played a key role in the failed July 2016 coup attempt against Erdogan.

Trump has reacted positively to Brunson’s release, saying this “will lead to good, perhaps great, relations between the United States & Turkey!”

From my perspective, it seems Trump and Erdogan can also reset their ties. During the August crisis, the two presidents did not target each other personally, leaving the door open to another fist bump when they make up. That day is not far off.

It’s clear that maintaining good ties with Turkey is in Washington’s interest. And Turkey is bigger than Erdogan. Despite Erdogan’s tight grip on the Turkish society for nearly two decades, half the country—a bloc demographically and economically the size of Spain—still refuses to vote or fold under him. U.S. policy regarding Turkey should not be about throwing the baby out with bathwater. Turkey borders Iran, Iraq, Syria, formerly-ISIS-held territory, and Russia across the Black Sea. It’s much easier, less cumbersome, and less costly, to implement U.S. policies regarding those countries and entities with Turkey on board. And to be sure, Turkey needs the United States as well. In the immediate term, Ankara needs Washington’s commitment to push back against Saudi Arabia regarding the alleged murder of journalist Jamal Khashoggi at the Saudi consulate in Istanbul.

With Trump ending his freeze of U.S-Turkish ties, U.S. government officials and their Turkish counterparts can now tackle various issues that divide the two countries. Yet while ,Brunson’s release is a good step toward normal relations, there is plenty more to do.

Most immediately, Congress has threatened sanctions if Ankara goes ahead with its plans to purchase in 2019 Russian S-400 missile defense system, a move that goes against Turkey’s status as a NATO ally.

From my interviews, it seems Erdogan’s standing has already improved in Congress following Brunson’s release—paving the way for Congress to allow Trump to sell Turkey the U.S. Patriot missile defense systems. To cement his reset with Trump, Erdogan should reconsider his decision regarding the S-400 system.

Gülen is a Turkish Muslim cleric who resides in the United States. Gülen once controlled a powerful religious political network in Turkey, with deep reach inside the country’s police, military, and judiciary. Over the past decade, Gülen helped Erdogan consolidate power—eroding Turkey’s democratic checks and balances, taking over the courts, locking up journalists, and silencing opposition.

Once Erdogan and Gulen consolidated power over Turkey’s democratic institutions as a collective duo, though, things became problematic: each wanted Turkey for himself. A raw power struggle ensued.

A majority of Turks, and not just Erdogan supporters, are now convinced that Gülen-aligned military officers led the failed 2016 coup that nearly toppled Erdogan. But here’s what Trump needs to know about Gülen: half of Turkey, which supports Erdogan, despises Gülen because he tried to murder Erdogan. The other half, which opposes Erdogan, despises Gülen because he empowered Erdogan.

Material evidence that Gülen personally ordered the coup is hard to obtain. It’s highly unlikely he texted his supporters, telling them “go ahead with the coup”—and therefore U.S. courts are unlikely to rule for his extradition.

Trump also needs to reconsider U.S. policy regarding cooperation with Syrian Kurdish Peoples Protection Units, (YPG) an armed group that Washington has relied on to fight ISIS. The YPG is an offshoot of the PKK, a terrorist entity that Turkey has been fighting for decades.

After defeating ISIS, YPG—a group with a Marxist pedigree—took over vast, Sunni Arab areas of Syria. Washington needs to empower Sunni Arabs in Syria if it doesn’t want ISIS, which feeds from Sunni Muslim resentment over political exclusion, to return. In my view, the seeds of ISIS 2.0 lie within Marxist YPG’s control over conservative Arab villages.

Cooperation between Trump and Erdogan in the Middle East extends beyond Syria. In recent months, I have learned that Washington has intensified its cooperation with Ankara to target the PKK’s leadership in Iraq. Those efforts should continue and Erdogan should acknowledge them.

Trump’s key objective in the Middle East is to push back against Iran. He wants Iran out of Syria and isolated in the region.

Erdogan should continue to support Trump’s new Syria envoy to push back against Iran, Russia, and the Assad regime there. If Assad is brought to justice, millions of Syrians brutalized by him during the war will have closure, also shutting the door to ISIS’ return.

Erdogan can help Trump beyond Syria to isolate Iran. For example, Turkey could join U.S. economic sanctions against Iran, which are taking a toll on the regime in Tehran.

Brunson’s release makes all of this is possible, but there remains a catch: Erdogan also needs to release other American citizens and local staff of U.S. diplomatic missions in jail in Turkey.

By releasing Brunson, an evangelical pastor, before U.S. midterm elections, Erdogan has helped Trump at the ballot box. Trump’s tweets typically get 30,000-50,000 likes, with his most popular declarations receiving around 80,000 likes. His announcement regarding Brunson’s release has received over 125,000 likes.

I believe that as powerful presidents, Trump and Erdogan will get along. The road ahead may well be rocky and differences remain between the U.S. and Turkey. But the two men, who like each other’s style of governance, are talking again. That is what matters. 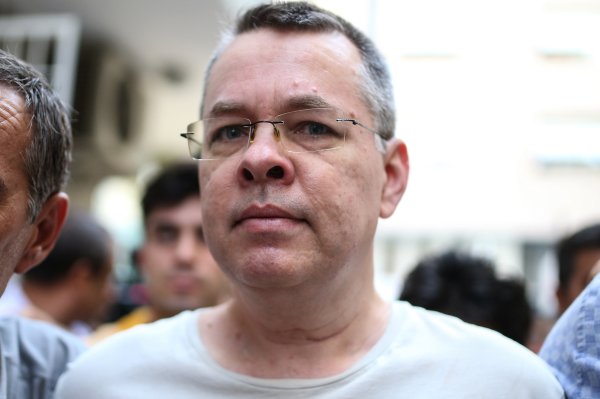 Why the Trump Administration and Turkey Don’t Win in Pastor Andrew Brunson’s Release
Next Up: Editor's Pick