Mary Bono has resigned as interim USA Gymnastics President less than week into her job, and following scrutiny from Olympic gymnasts over her appointment.

“It is with profound regret, coupled with a deep love for the sport of gymnastics and respect for those who aspire to be great gymnast that I today tendered my resignation as the interim CEO of USA Gymnastics,” Bono, a former Congresswoman and gymnast, said in the letter Tuesday afternoon. “My withdrawal comes in the wake of personal attacks that, left undefeated, would have made my leading USAG a liability for the organization.”

USA Gymnastics’ Board of Directors released a statement saying they accepted Bono’s resignation and that they believed it was in the best interest of the organization. “We, as a Board, are committed to taking action when we believe a change of course is necessary and to being responsive to our gymnastics community,” the statement said. “While we have made progress, we have much more work to do. This board is determined to take the necessary steps to support a safe, inclusive and competitive environment where all our athletes and members can grow, have fun and achieve their goals.”

Bono came under scrutiny from Olympic gymnasts twice in the week since she was appointed as the interim CEO of USA Gymnastics on Friday. First, for a now-deleted tweet from September where Bono covered a Nike logo on her golf shoes in response to Colin Kaepernick’s Nike ad. The second was for the fact that Bono was a principal for the law firm that represented USA Gymnastics during the initial investigation of Larry Nassar, the former team doctor charged with multiple counts of sexual assault.

On Monday, Gold Medalist and Aly Raisman, who says she was assaulted by Nassar, expressed outrage over Bono’s hiring. Raisman asked why USAG would hire someone “associated with the cover up of abuse.”

Prior to the discovery of her involvement in the Nassar case, Raisman’s teammate and fellow gold-medalist Simone Biles tweeted her displeasure with Bono over a tweet of her covering a Nike logo on her golf shoes.

In her statement announcing her resignation, Bono defended her tweet. “With respect to Mr. Kaepernick, he nationally exercised his first amendment right to kneel, “Bono wrote. “I exercised mine: to mark over my own golf shoes, the logo of the company sponsoring him for ‘believing in something even if it means sacrificing everything.'”

Bono said the covering of the Nike logo was an “emotional reaction” to attending a gold tournament in honor of armed service members, including her brother-in-law who was a Navy Seal who passed away. Bono said he “literally sacrificed everything.”

“I regret that at the time that I didn’t better clarify my feelings. That one tweet has now been made the litmus test of my reputation over almost two decades of public service.” she said. 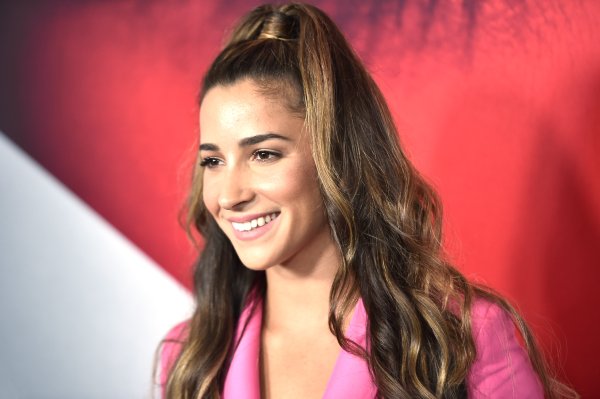