Piers Morgan the British TV personality, saw a photo of Daniel Craig carrying his infant daughter—and decided to mock him. His tweet featured a photo of the James Bond star carrying his baby in a baby carrier and included the hashtag #emasculatedBond and the word #papoose, a term appropriated to mean a child carrier.

Twitter immediately called him out on his feelings about masculinity. Fathers across the world sent him photos of themselves carrying their children.

“There is nothing more masculine than a Father taking an active role in nurturing and looking after his child,” another user wrote. “About time more in the media celebrated this, I mean aren’t you right-wing oddballs always bleating on about lack of family values?”

Morgan doubled down, though. In a series of tweets, he claims that he no qualms taking care of children or even carrying them on occasion, he does have a problem with men wearing a baby carrier, despite the fact that they make holding a squirming infant slightly easier, make the infant more comfortable, make it much harder to accidentally drop a child, and letting the whole process last longer. He finds baby wearing to be women’s work, apparently.

Then, in a crossover event, Captain America star Chris Evans leaped to Craig’s defense, noting that Morgan has to be “uncertain” of his own masculinity to concern himself with “how another man carries his child.”

Morgan scoffed in response, “Captain America wouldn’t wear a papoose.” Morgan did find one exception to his baby-wearing rule, though, noting that UFC fighters could do whatever they wanted—however he made the exception solely on “self-preservation grounds”. 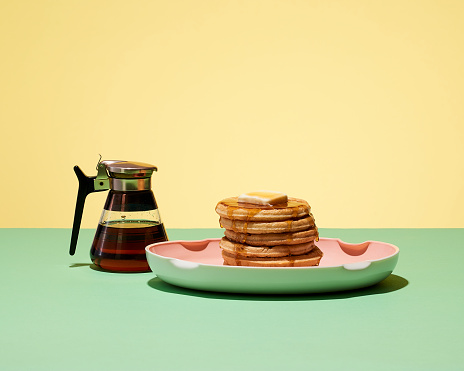 Singing IHOP Syrup Bottles Are the Latest and Greatest Viral Sensation
Next Up: Editor's Pick