Donald Trump was the least transparent presidential candidate in decades. He defied 40 years of precedent in 2016 when he declined to release his tax returns. Rather than sharing his health records with reporters, he dictated a memo to his personal doctor and discussed his health in a TV interview with controversial celebrity physician Dr. Oz. Even as President, his business operations remain opaque.

Now one of the contenders to take him on in 2020 is trying to use transparency against him.

In revealing the results of a DNA test of her ancestry this week, Democratic Sen. Elizabeth Warren showed just how far she would go to rebut Trump’s repeated and baseless claim that she lied about having Native American ancestry to get ahead in academia.

But it wasn’t the only move she’s made to be more open.

After six years of waving off questions from Capitol Hill reporters from routine “hallway interviews,” Warren has recently opened up to the D.C. press corps for more spontaneous question-and-answer sessions.

“In a world where Donald Trump is trying to take the legs out from underneath any press effort to hold him accountable,” she said, “then I think that means it’s even more important that the rest of us who serve in government on both sides of the aisle open up.”

In recent weeks, Warren also sat for a lengthy interview with the Boston Globe, which pored over hundreds of documents and interviewed 31 professors and released a dozen personnel forms relating to her academic career at Harvard University and other schools. The Globe found that she was not given preferential treatment in hiring because of any claims about American Indian heritage.

And in August, she also posted 10 years’ worth of her state and federal tax returns online.

Warren has explicitly tied the release of her own records to Trump’s refusal to do the same, especially in regard to his taxes.

The bid for more transparency shows Warren may have learned a lesson from Hillary Clinton’s failed campaign.

Though Clinton released her tax returns and medical records, as other candidates typically have, her campaign often had a begrudging attitude toward transparency. Her medical records were nowhere near the level of disclosure offered by John McCain in 2008, when he allowed reporters to look at thousands of documents. She refused to release transcripts of speeches she made at Goldman Sachs and questions lingered to the very end of the campaign about the Clinton Foundation.

Although she was more transparent than Trump by far, Clinton continually fed the perception that she wasn’t.

That hurt her several times, as when she didn’t reveal that she was suffering from pneumonia, fueling conservative conspiracy theories when she stumbled on the way out of a memorial for the Sept. 11 attacks, and when WikiLeaks posted the Goldman Sachs transcripts after campaign chairman John Podesta’s email account was hacked.

And it played a role in the most damaging scandal of her campaign, the revelation that she used a private email server as Secretary of State.

Warren’s approach so far seems more like that of former Florida Gov. Jeb Bush, who released emails from his time as governor on his own website, jebbushemails.com, in December 2014. Even though the emails were already available under state law, Bush’s move was aimed at showing that he had nothing to hide, and the emails barely made a ripple in the Republican primary.

Warren’s DNA test seems to have backfired in the short run. The Cherokee Nation criticized her for attempting to use a DNA test to prove ancestry, calling it “inappropriate and wrong,” which Trump used as an excuse to gleefully bash her some more. And some Democrats questioned why she engaged Trump on the issue at all, especially this close to the midterm elections.

But being transparent could bolster one of Warren’s likely campaign themes — if she chooses to run — of strengthening anti-corruption laws.

In a speech at the National Press Club in August revealing a government reform bill, Warren argued that measures like requiring all presidential candidates and other federal officeholders release their tax returns and instituting a lifetime ban on lobbying by former lawmakers and Cabinet secretaries would strengthen confidence in government.

“People don’t trust their government to do right because they think government works for the rich, the powerful and the well-connected, and not for the American people,” she said. “And here’s the kicker: They’re right.” 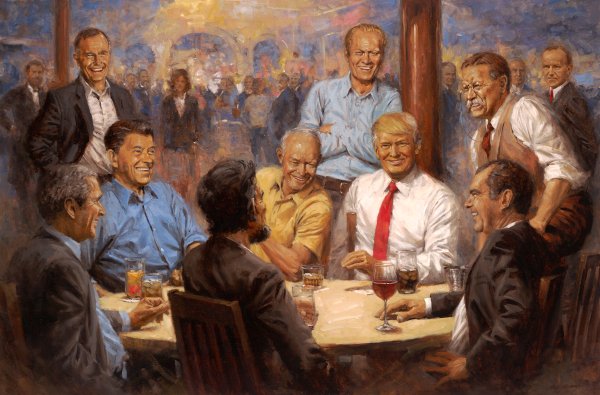 Painting of Trump With Lincoln Hangs in White House
Next Up: Editor's Pick