After arriving in Sydney for a 16-day tour of Australia and the South Pacific on Monday, Prince Harry was reunited with the 98-year-old war widow he refers to as his “favorite Aussie.”

While greeting fans outside the Sydney Opera House on Tuesday, the Duke of Sussex was apparently overjoyed to spot royal admirer Daphne Dunne in the crowd. “I was looking for you earlier and hoped you’d be here,” Harry told her after giving her a warm hug, according to ET. “It’s so good to see you again.”

Harry first met Dunne during his visit down under in 2015—when she was wearing the Victoria Cross medal that her husband, Lieutenant Albert Chowne, was posthumously awarded during World War II—and came into contact with her again in 2017.

But this was the first time that Meghan Markle was with him for one of their encounters. Harry, of course, was quick to introduce his wife to his most adoring fan. “I’m so glad I got to meet you,” the Duchess of Sussex told Dunne. “Harry has told me all about you and your special bond. It’s so lovely you came to see us, thank you.” 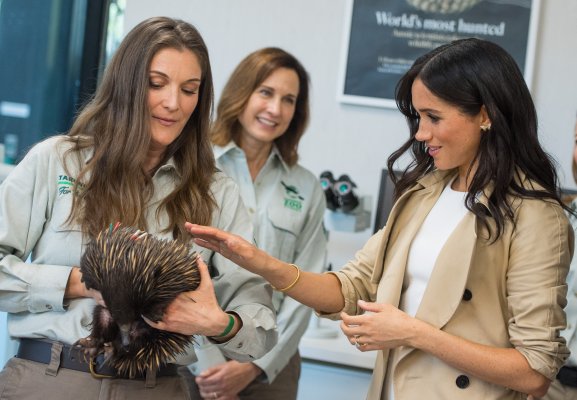 No One is More Excited About Meghan Markle and Prince Harry Than This Animal
Next Up: Editor's Pick