Prince Harry and Meghan Markle, more formally known as the Duke and Duchess of Sussex, are touring Australia and while most of the locals are very excited to meet them, none were quite as overwhelmed as one little fella they met at the Taronga Zoo in Sydney.

At the Zoo, the royal couple met koalas, including a set of baby koalas (or joeys) called Harry and Meghan, according to Australian outlet Now To Love, and a short-legged echidna named Lynx.

Prince Harry, who has met echidnas before, was curious as to why the prickly Australian native was drooling. One of the Zoo’s staff members replied, “It’s the excitement.” Perhaps he just heard the news that the newlyweds are expecting a baby sometime in Spring 2019? He wouldn’t be the first royal watcher to salivate at the thought of a new royal baby.

Lynx, the echidna is reportedly a “bit of a stud” and a father of two, which is impressive for a monotreme. Perhaps the royal couple will keep Lynx’s example in mind as they plan their family.

In the wake of the baby news, the royal couple received their first baby gifts from the governor of Australia—a pair of Ugg boots and a toy kangaroo, but not a toy echidna. 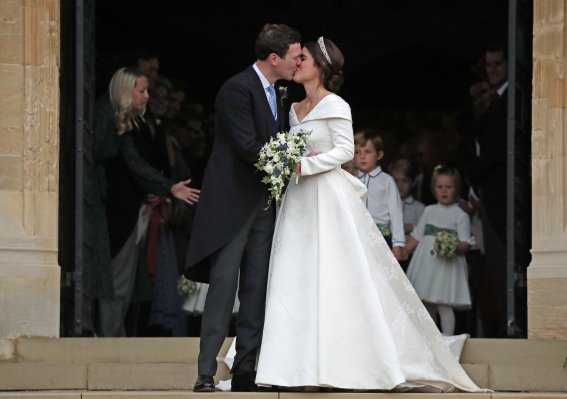 Jack Brooksbank Took Off His Glasses to Watch His Bride Walk Down the Aisle
Next Up: Editor's Pick