John Oliver borrowed a few moves from the WWE’s playbook to take the organization to task over its close relationship with Saudi Arabia on Sunday’s episode of Last Week Tonight.

Oliver said President Donald Trump and his representatives have been too cozy with Saudi Arabia, whose government is led by Prince Mohammed bin Salman, also known as MBS. “Trump’s intent ‘bromance’ with [bin Salman] is bad news, because when you set no boundaries on an oppressive regime, they are always going to ask themselves, ‘How much can we get away with here?’ And as we saw this week, the answer to that may well be: Pretty much anything,” Oliver said, referring to the disappearance of Washington Post columnist Jamal Khashoggi, a vocal critic of the Saudi government who appears to have walked into the kingdom’s consulate in Turkey and never emerged.

Oliver likened the Saudi prince’s relationship with Trump to a babysitter with an unwieldy child, comparing the influx of cash to the U.S. to a young caregiver plying a charge with Twizzlers. “’Oh, I thought this was going to be difficult, but if all you want is Twizzlers, I have loads of them — here, take all you want, and the shut the f–k up,” Oliver joked.

However, according to Oliver, MBS isn’t just interested in bringing business to the kingdom. Oliver noted that, “MBS’ PR push isn’t just toward attracting businesses. It’s also toward changing the world’s perception of Saudi Arabia. “To that end, he struck a 10-year deal with one of the most popular and most American franchises there is — World Wresting Entertainment, or WWE.”

According to Oliver, the WWE held their first event in Saudi Arabia back in April, and audiences “around the world were treated to wall-to-wall propaganda about the new Saudi Arabia, including video showing women happily driving, men dancing and tourist destination beauty shots as well as constant excited compliments throughout the broadcast.”

Oliver played clips from broadcast, which showed the commentators praising the country and superstar John Cena thanking the kingdom of Saudi Arabia. At the end of the clip reel, Oliver added the punchline: “Wow. It seems the WWE is as overtly pro-Saudi Arabia as it is latently homoerotic, which is to say, intensely.”

WWE responded to criticism of its ties to the kingdom in a terse statement reading, “we are currently monitoring the situation,” CBS Sports reports. 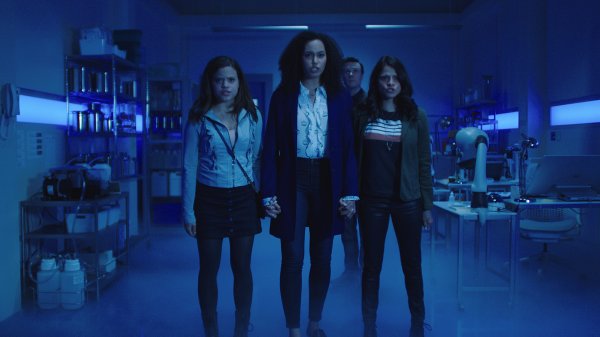 The CW's Charmed Reboot Is So Political, It Forgot to Be Fun
Next Up: Editor's Pick