President Donald Trump liked a painting of him having drinks with Abraham Lincoln, Richard Nixon and Teddy Roosevelt so much that he called the artist on the phone and then put a print of it in the White House.

Called “The Republican Club,” the print of 10 Republican presidents sitting around a table could be seen briefly in the background of Trump’s interview with “60 Minutes” Sunday, and an image of that moment went viral on social media.

As all this was playing out, Andy Thomas was at his home in Carthage, Mo., watching the Kansas City Chiefs play the New England Patriots on TV while working on a painting of a train robbery in the Old West. (It’s a favorite subject of his: “Lots of horses, lots of action.”)

Thomas’ phone began to ring, as friends reached out to tell him, but he assumed they were just pollsters asking about the Missouri Senate race. Finally, his wife came down to show him on the computer.

“I was ecstatic,” he told TIME afterward. “A lot of times gifts aren’t really hung up, they’re just pushed in a closet somewhere. To find out it’s actually hanging is really a treat.”

Read More: There’s a Subtle Feminist Message in This New Painting of Trump

It’s unclear how the print made its way into the White House, but Thomas said Republican Rep. Darrell Issa of California had told him recently that he’d be showing it to Trump.

Thomas is not a very political person, but he’d done a portrait of Issa a few years ago and the two have kept in touch. But he was surprised two weeks ago when he came in from mowing the lawn and his wife and business partner, Dina, told him that Trump would be calling shortly.

“He basically said, ‘most portraits of me I really don’t like,'” Thomas said. “And he’s right. He’s hard to paint. There’s some bad ones out there.”

As he often does, Trump then asked Thomas how he was doing as president and what his friends and neighbors think about him, as well as how he thinks the heated Senate race between Democratic Sen. Claire McCaskill and pro-Trump Republican Josh Hawley will end.

Thomas said he was a bit surprised at that turn in the conversation.

“I’m thinking, ‘I’m a damn artist, what is he asking me about this for?'” he recalled.

As a cowboy painter who dabbles in presidential portraits, Thomas said it was nice to hear back from one of his subjects directly. He’d once met a cousin of Bill Clinton’s who told him, secondhand, that he liked the portrait, and Richard Nixon’s niece once praised his painting.

But Thomas was proud that Trump had recognized the work he put into one of the toughest parts of the painting: the president’s smile.

He said he’s found that some presidents have a natural smile: Ronald Reagan, Dwight Eisenhower, John F. Kennedy, Barack Obama. But others, like Trump, have more of a forced campaign smile that doesn’t look right in a painting. He found it particularly hard to get Nixon right the first time he painted him.

To get Trump’s smile, Thomas said he looked at thousands of photos.

“Trump has that one thing where he sticks his chin up and smiles really big, and it’s great for a caricature but not necessarily flattering to him,” he said. “I had to find a photo where it looked like he’s actually heard something funny, so it looks like a genuine smile.” 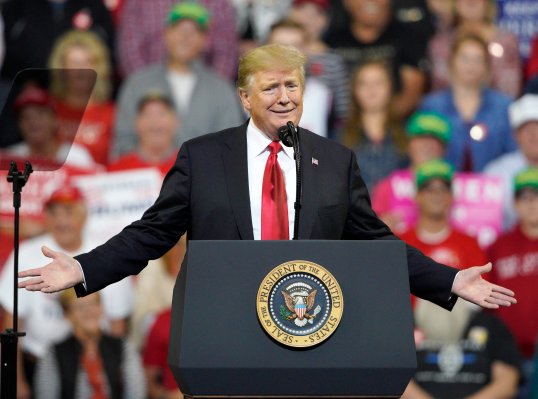 Trump Talks to TIME About His Effect on the GOP
Next Up: Editor's Pick