Melania Trump: 'I Don't Really Care' Jacket Was a Message to 'Left-Wing' Critics

Melania Trump sat down with ABC last night for her first solo on-air interview since President Trump’s inauguration. There, she revealed that her “I don’t really care, do u?” jacket was actually meant to send a message to the “left wing media.”

The First Lady shocked many last June when she wore the boldly printed jacket as she visited a Texas holding center where undocumented children were temporarily placed after being separated from their parents.

Many interpreted the jacket as insensitive considering the outrage over her husband’s “zero tolerance” immigration policies.

Initially, the First Lady’s spokespeople said there was no message behind the jacket, but Melania revealed to ABC’s Tom Llamas, during an hour special “Being Melania- The First Lady” that aired Friday, that it was a direct message to her left-wing critics.

Asked if she was intentionally sending a message, Melania said, “Yes, it was kind of a message.”

She said she purposely put the jacket back on when boarding the plane after seeing how “obsessed and upset” the media got over it.

“I said ‘you know what? that’s what I’m talking about,'” she said. “I would prefer that they would focus on what I do and on my initiatives than what I wear.” 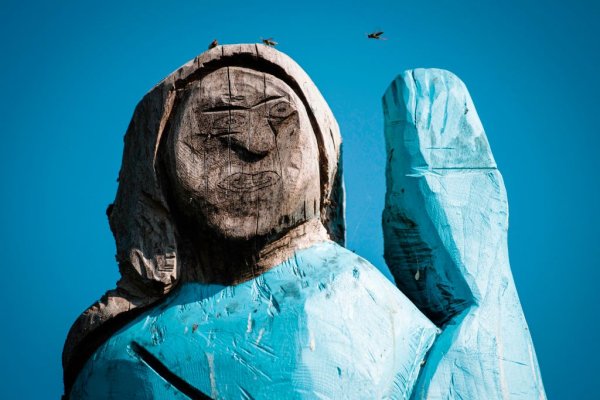 Wood Statue of Melania Trump Unveiled in Slovenia
Next Up: Editor's Pick