The death toll from Hurricane Michael rose to 16 after five people were killed in Virginia Thursday—and is expected to rise after search-and-rescue teams in Mexico Beach announced that they began finding bodies.

Five people were confirmed killed in storm-related deaths, the Virginia Department of Emergency Management said in an update on the hurricane Friday morning. At least 520,000 people were left without power and 1,200 roads were closed due to the storm. Michael had been downgraded to a Tropical Storm by the time it hit Virginia.

Jeff Caldwell, a spokesperson for the Virginia Department of Emergency Management, tells TIME that four of the people who died drowned in different parts of the state. The fifth was a firefighter who died in a crash along a highway near Richmond that involved a firetruck, Caldwell said.

Three people who drowned died near the Roanoke-Danville area in western Virginia, Caldwell said. Another person drowned in the central part of the state. Caldwell said that people who died by drowning were caught in situations where their vehicles were swept away by floodwater. It’s a common occurrence during hurricanes, he said.

“Unfortunately, a lot of deaths associated with storms like this are preventable. Most are related to motorists trying to drive across flooded roadways,” Caldwell said. “In less than a foot of water, a vehicle can be swept downriver. Many times, motorists assume water isn’t too deep and quickly find themselves submerged.”

He cautioned people against driving across flooded roadways.

The storm, which has moved off the coast and into the Atlantic Ocean, killed four people in Gadsden County, Florida. An 11-year-old girl died in southwest Georgia due to strong winds from the hurricane, while a 38-year-old man and woman in North Carolina died after a tree fell onto their moving car. and three people died in Marianna, Fla. in storm-related incidents.

The majority of hurricane-related deaths are caused by water, many times after the storm has passed through an area. The ensuing storm surge and rain are the cause of 76% of direct deaths from hurricanes, according to a 2014 study from the American Meteorological Society. The study found that between 1963 and 2012, 90% of deaths came from water-related incidents, mostly by drowning. 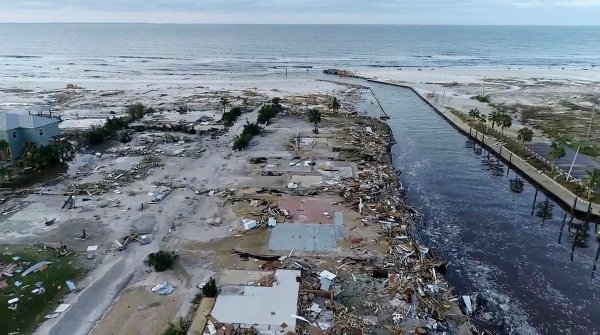 20 People Found Safe in Town Where Hurricane Michael Made Landfall as Aerial Footage Shows 'Unimaginable Destruction'
Next Up: Editor's Pick