A man in Greensboro, Fla., was killed Wednesday when a tree crashed through his home — the first reported death caused by Hurricane Michael, which authorities have described as the worst storm to ever hit the Florida Panhandle.

A spokesperson for the Gadsden County Sheriff’s Office said the man was in his mid-40s and had been at home with his wife, who authorities are now trying to reach.

“We are attempting to get to the home. There are power lines everywhere. The roads are blocked,” Sgt. Angelie Hightower told TIME.

Hurricane Michael made landfall Wednesday as a Category 4 storm with winds of 155 mph, destroying buildings and leaving some structures fully submerged in water.

The Greensboro man’s death came after Florida Gov. Rick Scott said at a press conference Wednesday night that there had been no reported fatalities yet.

“Hurricane Michael is the worst storm that the Florida Panhandle has ever seen, and one of the worst power storms to ever make landfall in the United States,” Scott said at the press conference.

He said thousands of first responders are now working to restore power, conduct medical search and rescue missions, and distribute food and water.

As the hurricane moves out of Florida, Scott warned that flash floods and tornadoes are still possibilities and said “the weather is still extremely dangerous.”

Hurricane Michael is currently moving northeast with maximum sustained winds of 90 mph. The storm is expected to move across southwestern and central Georgia Wednesday night, weakening as it continues to move northeast Thursday and then off the coast into the Atlantic Ocean early Friday, according to the latest National Hurricane Center advisory. 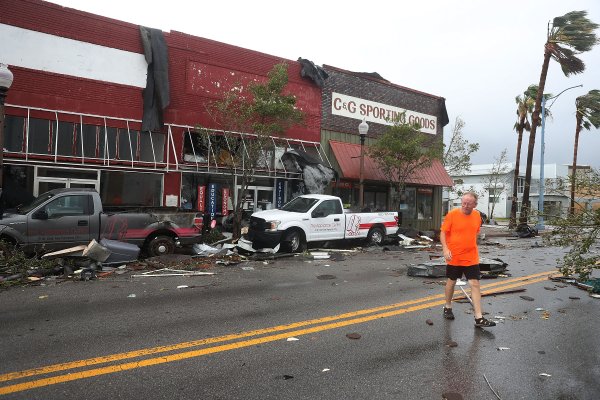 Hurricane Michael Is the Third Most Powerful Storm to Ever Hit the U.S. Mainland
Next Up: Editor's Pick