Cardi B went all out for her performance of “I Like It” at the 2018 American Music Awards on Tuesday night, so it was no surprise that the audience was stunned by the on-stage show. One gobsmacked audience member’s over-the-top reaction was so pitch perfect that it instantly became a meme.

The man in question was former Saturday Night Live star Taran Killam who was on-hand with his wife, How I Met Your Mother actress Cobie Smulders, to present an award later in the evening. Before he could take the stage, though, he nearly stole the spotlight when his jaw literally dropped during the performance by Cardi B, J Balvin, and Bad Bunny, who was wheeled out in a shopping cart with a fake third-eye plastered on his forehead.

For the song, the stage at the Microsoft Theater was transformed into a madcap Mardi Gras celebration, packed with bright lights, Carnivale colors, bicycle riders, drummers, and so much more. When Cardi B showed off her flexibility by casually pulling her leg up to her head, Killam apparently couldn’t contain his amazement. The moment the camera settled on his stunned face, the at-home audience (and the GIF makers at Giphy) jumped into action turning his bewilderment into a very useful meme to express their own awe at the on-stage antics. 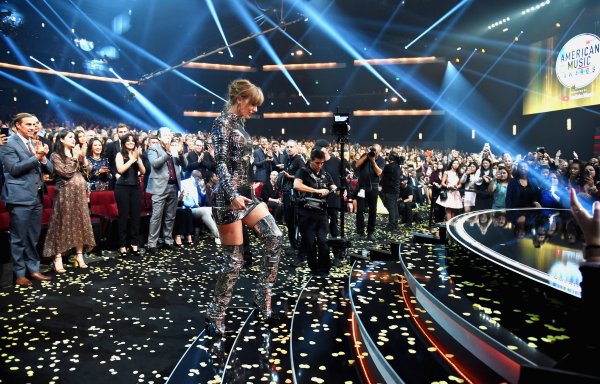 The Good, the Bad, and the Bewildering at the AMAs
Next Up: Editor's Pick