The Trump Administration Has Escalated Its Conflict with China Even Further. Here’s What Needs to Happen to Stay Out of War

Chinese President Xi Jinping (L) holds a grand ceremony to welcome U.S. President Donald Trump at the square outside the east gate of the Great Hall of the People in Beijing, China, on Nov. 9, 2017.
Xinhua News Agency/Getty Images
Ideas
By James Stavridis
Admiral Stavridis (Ret.), a TIME Contributing Editor, was the 16th Supreme Allied Commander at NATO and is an Operating Executive at The Carlyle Group. His new book is 2034: A Novel of the Next World War. His previous nonfiction book was Sailing True North: Ten Admirals and the Voyage of Character

Those preoccupied last week with concerns over the effect Justice Brett Kavanaugh would have on the Supreme Court for decades were actually, it turns out, being too near-sighted — as the Trump Administration made a move that could significantly affect an international relationship that will last centuries. In a little-noticed pivot, the Administration set up China as the major geopolitical opponent of the United States in no uncertain terms, led by a speech from Vice President Mike Pence. This change in position — not to be confused with the far more benign “Pacific Pivot” of the Obama Administration — has set off alarm bells ringing from Tokyo to Melbourne.

We are seeing China bursting with new power and political purpose in global economics (with the one-belt, one-road strategy); aggressive political strategies aimed at hold-out democratic enclaves like Hong Kong and Taiwan; deep cultural accomplishment (featuring a dynamic film industry and a powerful state-sponsored sports culture); a muscular control over international Chinese figures (arresting the head of Interpol and a globally famous film star); and a far more assertive approach in international organizations (including creating the Asian Infrastructure Investment Bank). The recent reports of China’s inclusion of intelligence devices into internationally sourced motherboards is a dramatic indicator of their intent to increase their control of global cyber supply chain — the real Silk Road of the 21st century. And having spent much of my long naval career in the Pacific, it is fascinating to watch China transform from the third-rate naval power of a couple of decades ago to a robust, highly capable maritime foe — one that has integrated offensive cyber warfare into their training and readiness far more effectively than the United States.

All of this means that it is far past time for the United States to develop a coherent and effective strategy to face the rise of China. We’ve tried several approaches in the past. Benign neglect (“it will all just work out if we can just get along”) failed. So did positive engagement, which some have labeled “Panda hugging” and included showing a willingness to accept a variety of unbalanced practices in trade and intellectual property. And the far more assertive and aggressive posture laid out in Vice President Pence’s speech will not work either. All of these approaches are too short-term.

I assure you that China is thinking about the 300-year future of their nation. They have tactical lines of effort flowing into mid-century. Meanwhile, in the Pentagon, people get excited about delivering a Future Year Defense Plan, which looks out five years. That’s not good enough. If we are going to deal with an emerging Chinese macro-competition in this century — something the Trump Administration is correctly signaling we will face — now is the time to lay out a true 21st-century strategy for China.

So, what should we do? What does a real strategic plan look like?

To start, we should recognize the real possibility that we could end up in a global war with China if we do not handle this account with care. A recent study of historical cases wherein rising powers have confronted established powers over 2,500 years of history showed that, in the vast majority of cases, a war ensured. Let’s set an overarching goal of a peaceful, if occasionally contentious, co-existence. We should confront where we must — such as China’s land-grab in the South China Sea, their theft of intellectual property and deeply unfair trade practices. But we should also cooperate where we can, including on North Korea, reconstructing Syria, medical diplomacy, disaster relief, climate change, the Arctic (where China has a surprising level of interest) and a host of other international issues.

Still, we must also maintain our (slight) technological edge, especially in the cyber realm. If we do end up with a military confrontation with China, it will likely not be a geographic fight with tanks and combat brigades. Instead, it will exist primarily in the cyber world, and secondarily at sea and in the air, even very possibly in space. We have a slight edge now in cyber security, quantum computing, artificial intelligence and machine learning, but it is eroding. Maintaining it will require a concerted public-private partnership; unfortunately, the recent Google decision to pull out of the Maven artificial intelligence project, for example, does not bode well for this. We must redouble our efforts at creating a Silicon Valley–Pentagon strategic axis on research and development.

Beyond our two nations, though, it is hard to overstate the potential geopolitical importance of India, especially if coupled with Japan. With those two powerful democracies working alongside us, the chances are far higher of creating a counterbalance to a rising China. While we are strongly engaged with Japan (including a mutual defense treaty), our ties with India are more tenuous and fraught, following a lengthy history of mistrust. Building a strong, coherent relationship with India — potentially the dominant nation of the 22nd century — is critical.

Lastly, our strategic approach must become accepting of the choices China makes — and not allow the relationship to be driven by emotion or ideology. The best book on leadership ever written may be The Godfather by Mario Puzo, in which again and again we see that we must not make the mistake of hating our enemies — in the end, it only clouds our judgment. China will make its own choices about domestic governance and how its society is structured. America must accept that it can only change so much.

We need a pragmatic relationship with China that is transactional and occasionally confrontational but ultimately avoids the big war. Creating that connection will be a key driver of how this turbulent century — and those beyond it — will unfold. 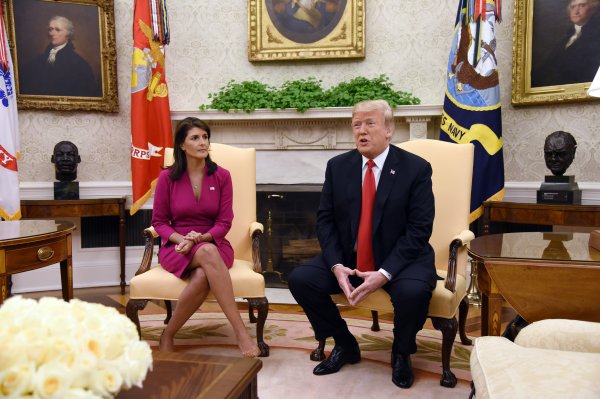 Trump Says Ivanka Trump Would Be a Great U.N. Ambassador—But Won't Appoint Her Because of a 'Nepotism' Issue
Next Up: Editor's Pick