At the 2018 American Music Awards in Los Angeles on Tuesday night, Taylor Swift took home the top award — and also got some extra buzz after ABC bleeped a word from her show-opening performance of “I Did Something Bad.”

Against a backdrop of a giant snake head, Swift put on a high-powered number that included the usual lyric from her Reputation song: “If a man talks s–t, then I owe him nothing / I don’t regret it one bit, ’cause he had it coming.” ABC chose to bleep the offending word, sparking plenty of conversation from fans online; Swift isn’t known for needing to be censored.

Swift’s performance at L.A.’s Microsoft Theater marked her return to an awards show stage slot after a three-year absence. (It had already been a headline-making week for Swift; on Sunday she shared a message on social media elucidating her Democratic political stances and urging followers to register to vote, a marked departure from her previous silence on politics.

And in her final AMAs acceptance speech, she doubled down, reminding voters to get out to the polls for the midterm elections.) She was joined by a number of American Music Awards 2018 performers including Dua Lipa, Ciara and Missy Elliott and Jennifer Lopez; the evening ending with a celebratory tribute to Aretha Franklin, the recently passed Queen of Soul. The AMAs are different from other music awards shows in that each award is entirely bestowed by fan votes. Tracee Ellis Ross hosted the evening’s event in a series of glamorous rotating outfits.

As for the American Music Awards 2018 nominees: The nominations were led by Drake and Cardi B, who were both up for eight awards. (Swift was up for three, while her own tour opener and fellow AMAs performer Camila Cabello had five chances, many of which she handily won, including New Artist.) Drake, Imagine Dragons, Post Malone, Ed Sheeran and Swift were all in the ring for Artist of the Year, too, an award that Swift had won already back in 2009, 2011 and 2013 before taking home the 2018 prize as well. 2017’s Artist of the Year went to Bruno Mars, while 2016’s was Ariana Grande. 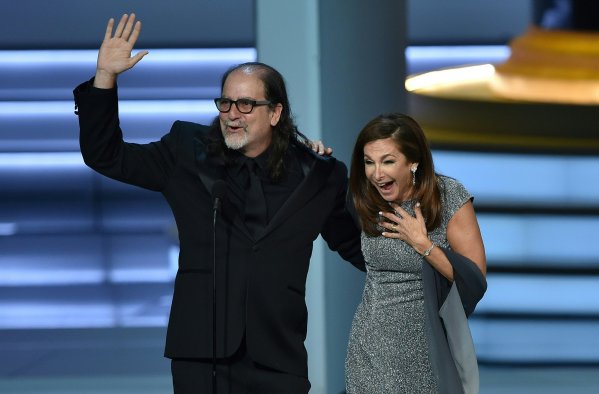 'I Was Expecting a Private Proposal.' The Woman Who Got Engaged During the Emmys Was Just As Surprised as You
Next Up: Editor's Pick