Melania Trump Says We Should Stop Critiquing Her Fashion Choices. Here's Why It Keeps Happening

Melania Trump‘s recent solo trip to Africa sparked a familiar controversy for the First Lady: a heated critique of her wardrobe.

Trump responded to her detractors who said she wore clothing reminiscent of European colonizers (including a white pith helmet) while visiting four African countries, on Saturday by saying that the attention given to her clothes should be centered on other aspects of her trip.

“I wish people would focus on what I do, not what I wear,” the First Lady said during her final stop in front of the Great Sphinx in Giza, Egypt, all while clad in a fedora and a khaki suit and tie outfit that called to mind Meryl Streep’s Danish colonizer in Out of Africa.

The sentiment is one that Melania and her team at the White House have reiterated on multiple occasions, following fashion moments that were questioned by some members of the public and the media alike for being insensitive or “tone deaf.”

Chief among them is the time Melania wore stiletto heels while en route to survey the devastation caused by Hurricane Harvey in August 2017 (it should be noted that the First Lady changed into sneakers before disembarking in Texas) and when she caused an uproar on social media in June by wearing an olive green jacket that read “I really don’t care. Do U?” while on her way to visit a detention center for immigrant children in a Texas town on the border of Mexico in June this year.

Following the jacket backlash, Melania’s spokesperson, Stephanie Grisham, issued the following statement: “It’s a jacket. There was no hidden message. After today’s important visit to Texas, I hope the media isn’t going to choose to focus on her wardrobe.”

Is a jacket with a puzzling message ever just a jacket or a pith hat merely an accessory? In the case of a First Lady, probably not to many Americans watching. First Ladies — and subsequently, their sartorial presentations — have been notoriously scrutinized throughout history and while some critics have derided the attention paid towards their fashion choices as sexist or trite, what they wear communicates how they choose to present themselves as public figures.

With her penchant for European luxury houses and glamorous style, Trump is hardly the first to be studied for her style as a First Lady: Michelle Obama, Hillary Clinton, Nancy Reagan, and Jacqueline Kennedy Onassis, among others, were all actively discussed in relation to their fashion choices.

Dr. Rhonda Garelick, a professor of English and performing arts at the University of Nebraska whose work focuses on the the intersections of fashion, culture, and politics, believes that the fashion of a First Lady is inherently political given the way that we interact American politics.

“The symbolic aspect of political culture — how presidents and their spouses look, how they are received in public, the kind of photographs we see of them, is an enormous part of our political landscape and the fact that we’re all talking about it proves that there’s great fascination for it, so that in itself, is politics,” Garelick said. “Politics is not just policy or legislation. Politics is how people live the experience of witnessing leaders interact and how we talk about them with one another. So yes, the fashion choices of the first lady partake in politics.”

For Melania, her background as a model means that her fashion has long been a part of her public identity. This, coupled with her more reserved demeanor as a First Lady, has led many to look for meaning in her clothes, something that Garelick considers a form of nonverbal communication.

“We need to accept that – for the moment anyways — we have a very traditional president and First Lady couple in that the First Lady has restricted herself to more ceremonial public appearances. We don’t hear very much from her, she doesn’t give very many speeches,” Garelick said. “One of the few expressive modes to think about Melania Trump’s role is, in fact, her sartorial communication. I think it’s perfectly fair and not in the least sexist or dismissive to take it seriously. It’s a way of taking seriously a form of communication. We know that Mrs. Trump is a fashion expert, with a career in fashion — so why shouldn’t we take seriously her use of this mode to present herself in public? I see no reason to push that aside.”

Garelick said it’s tough for Trump and her staff to dismiss her fashion choices and how they’re received.

“You can’t obviously present such a carefully constructed presence in the world and at the very same time say, what I wear isn’t important, disregard it,” she said.

If what the First Lady wears really does matter, then what should we make of the way that Trump has chosen to dress herself as a public figure on her recent trip through Africa, where she represented the U.S. and the Trump Administration?

Dr. Laura Seay, an assistant professor of government at Colby College whose work centers on African politics, thinks that the First Lady’s fashion choices — and her activities — during this trip influenced perceptions of what Americans think of Africa.

“When you show up in full colonial get-up, it really sends a message to Africans about what the Administration thinks about the continent and what its policies will be like, and I think that’s true whether you intend it to be that way or not,” Seay said.

“It’s not just the clothes, but what she did — she wants us not to talk about her outfits and to focus on her activities, but the stuff that she did didn’t have much substance either. It’s very nice to go to an orphanage, hand out blankets, teddy bears — there’s nothing wrong with that. But that’s not going to make substantive change in the life of individuals … the stuff that she did was bare minimum engagement, lots of clichéd activity, trite. The overall message – both the look and the action, sends the message that the United States doesn’t really know or care about the real, modern Africa, in the 21st century.” 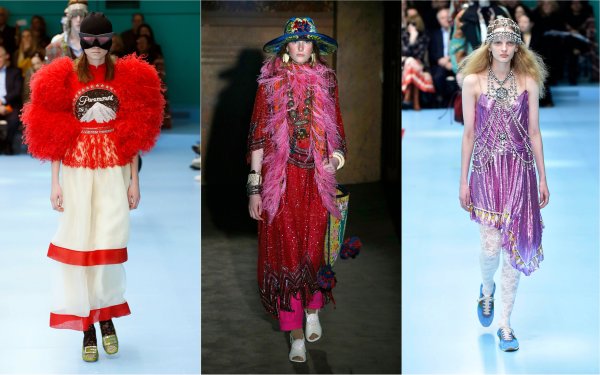 The Annual 2019 Met Gala Will Be 'Camp'-Themed. Let Us Explain.
Next Up: Editor's Pick