2018 American Music Awards Recap: The Good, the Bad, the Bewildering

Music’s biggest stars were all under one roof at the Microsoft Theater in Los Angeles on Tuesday night, with Black-ish star Tracee Ellis Ross hosting for a second consecutive year. She opened the proceedings with a dance routine, a promise to highlight black designers through her fashion choices throughout the night, and a fervent hope to end up on the Shade Room (or as she calls it, “the black TMZ”) before the night is over.

Here are the good, bad, and bewildering moments from the 2018 American Music Awards:

Least Political Moment: Fresh off a three-year break from award shows, and complete with newly-minted political personality, Taylor Swift opened the AMAs with “I Did Something Bad” and a guest appearance from a giant snake. Perhaps the song choice could was riposte to the ticking off from President Trump (who now likes her music “25% less”). Sadly, the performance was decidedly unpolitical (although she did get bleeped for saying a naughty word during her song).

Best Mom Realness Moment: Favorite rap/hip hop artist nominees were Cardi B, Drake, and Post Malone. The winner was Cardi B who hit the stage in a Carmen Miranda-inspired dress to chants of “Cardi! Cardi!” She said “I just want to thank my daughter, not just because she’s my daughter,” but because her daughter inspired her to prove everyone wrong, adding, “They said I wasn’t going to make it after I had a baby!”

Most In Need of a Makeover: Post Malone’s fans want him to appear on the next season of Netflix’s Queer Eye and his sartorial choices—and drinking—at the AMAs probably didn’t change their mind.

Most Succinct Acceptance Speech: Post Malone accepted his award for Favorite Male Artist Pop/Rock with a few honest words, “I’m not very good at talking in front of people, but I just want to say thank you for the award, and I love you guys very very much.”

Biggest Surprise: The biggest surprise was that Taylor Swift didn’t even feign surprise! She simply smiled, booped Camila Cabello on the nose, and took the stage in a disco-ball masquerading as a dress and rattled off a gracious list of thank yous to her tour mates, her crew, and her fans. The old Taylor really is gone.

Best Diva Moment: Mariah Carey returned to the AMAs for the first time since 2008 and made sure the performance was memorable. She appeared on stage like a Venus in Feathers perched on a cloud-like pink platform singing “With You,” the first single from her upcoming album. The diva was nearly upstaged when her pink cloud erupted and men popped out of her skirt to dance around her like it was the most natural thing in the world.

Best Inter-generational Moment: Busy Phillips and John Stamos came on stage to announce the chosen Favorite Male Artist. Soul/R&B and Phillips admitted that she used to have a huge crush on Stamos. Naturally Stamos, who was wearing a Jonas Brothers t-shirt, wanted to know what killed the crush? “The poster on my wall started to age fast than you did and it started to freak me out,” she said. Then Khalid came on stage to collect his prize and hugged John Stamos even though the 20-year-old probably doesn’t know who he is.

Best Bleeping: When Cardi B, Bad Bunny, and J Balvin showed up to play their song-of-the-summer hit, “I Like It,” the censors had their work cut out for them. The censor was very focused, apparently, because nary a bad word slipped through, which was particularly impressive because there was a full-on carnival on stage and Cardi B was doing her best to distract the censor from the job.

Best Audience Reaction: Former Saturday Night Live star Taran Killam appeared to be gobsmacked by Cardi B’s onstage antics (or the bleeping skills of the censors) and was caught on camera standing with his mouth wide open staring at the carnival that had erupted on stage.

Most Likely To Blow Up The Place: Post Malone got over his reticence long enough to nearly light the stage on fire with dramatic pyrotechnics for his mash-up of “Better Now” and “Psycho” with Ty Dolla $ign. Second place goes to 21 Pilots, who blew up a car like they were auditioning to be special effects men in a remake of the Chuck Norris classic Invasion U.S.A. In third place is Carrie Underwood, who performed “Spinning Bottles” on stage surrounded by wine bottle candle holders that literally spun around her in a circle. Are there firemen on standby?

Saddest Intro: Amber Heard showed up to introduce 21 Pilots, which she noted was “exactly the number of TV shows I have been on that haven’t been picked up.”

Most Political Moment: Billy Eichner refused to open the envelope containing the winner’s name until he had his say, which was a plea to the young folks to Vote. He pointed out that it was the final night to register in 20 states in the country and that it was a crucial election for people who care about climate change, LGBTQ rights, and equality. He then told everyone to go to vote.gov “like Taylor Swift told you to” before opening the envelope to announce an award for Shawn Mendes.

Best On Stage Costume Change: When Jennifer Lopez took the stage to perform the Sia-written track, “Limitless”, she was wearing a suit, surrounded by a troupe of female dancers also wearing suits. At the end of the performance it was sequins and nary a suit in site—no calls to the FCC for indecency required.

Best Meme Come To Life: When Missy Elliott took the stage with Ciara she brought her “funky white sister” Mary Halsey with her to cheer her on from the audience.

Best Queen Cover Band: Panic! At the Disco showed up to play Queen’s “Bohemian Rhapsody” on stage, but it’s hard to say why they were there playing a very straightforward cover. Was it just to advertise the upcoming Queen biopic or just to prove that they would kill at karaoke?

Sorry, Whitney Houston: If you were wondering why Taylor Swift broke her awards show hiatus, it’s because she was likely to break a record. She did just that when she picked up the Artist of the Year award, breaking Whitney Houston’s record for most wins by a female artist, and becoming the most awarded female artist in AMA history. After Taylor collected her third prize of the night, she boldly went political again, reminding people to vote.

Most Likely To Upset Madonna Remember when Madonna paid tribute to Aretha Franklin at the MTV Video Music Awards, but barely mentioned the Queen of Soul at all? The producers of the AMAs remember it and decided to program an antidote that started with a video retrospective that looked back at Franklin’s entire career and ended with a medley of her hits performed by stars like Gladys Knight and gospel legends Mary Mary and Cece Winans. 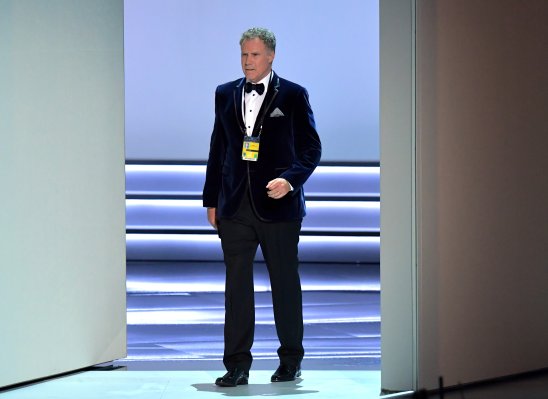 Will Ferrell Stepped in With More Cowbell When Cowbell Was Desperately Needed
Next Up: Editor's Pick