The Numbers Are Better for Donald Trump Than You Think. Here's Why

If history holds true, President Donald Trump is about to enter a rougher period of his presidency.

The most current forecasts show Republicans are likely to lose the House of Representatives in the midterm elections, while maintaining their narrow majority in the Senate. That would mean new Democratic-led investigations and gridlock on his legislative agenda.

But that doesn’t mean that Trump is in trouble when it comes to his own re-election. In fact, there are a few numbers that might leave him optimistic about the overall state of his presidency as he heads into its next phase.

Most Americans have not approved of the job Trump is doing as president since shortly after inauguration.

But the big picture is that those numbers really haven’t changed much, which is uniquely among recent presidents. At times, Trump has dipped into the mid 30s on approval and he has seen his disapproval hit the low 60s, but the numbers return to normal after a while. Overall, his approval is like a well-built storm cellar: There’s a low ceiling, but the floor is stable.

Keep in mind that all this has happened even as Trump has done things that pundits argued would have hurt a typical president: arguing for moral equivalence between white supremacists and counter-protesters in Charlottesville, casting doubt on U.S. intelligence services while standing next to Russian President Vladimir Putin, mocking a woman who accused a Supreme Court nominee of sexual assault at a rally.

One reason that Trump’s approval ratings are so stable: Republicans and Democrats have largely made up their minds.

In fact, Trump’s approval rating is more polarized than any president since Dwight Eisenhower, with an average of 84% of Republicans saying they approve of his performance and an average of just 7% of Democrats saying the same, according to Pew Research Center data collected over the past year and a half.

Trump’s approval among Republicans is comparable to the numbers other presidents have received from members of their own party, though he’s doing much more poorly among Democrats. By comparison, an average of 31% of Democrats approved of Ronald Reagan’s job performance and an average of 23% approved of George W. Bush, according to Pew.

Reagan, Clinton and Obama bounced back

The next question is whether he can improve before the next time he faces voters.

At this point in his presidency, Barack Obama had an approval rating only a few percentage points higher than Trump’s, while Reagan and Bill Clinton had roughly similar numbers. All three went on to be re-elected after a slow climb back to a majority approval rating.

And it could be that the partisanship that is keeping his approval ratings steady also limits his ability to grow.

But the big picture is that two years is a long time in politics. Overseas conflict, major changes in the economy, the workings of the legislative process and changes to the way he approaches the job could all have an effect on presidential approval ratings, for better or worse.

But he’s not in great shape at the state level

National approval ratings can be misleading, since they don’t capture how a presidential candidate would do in the Electoral College. After all, Trump lost the popular vote in 2016 by nearly 3 million votes, but won anyway.

That said, Trump is not doing well right now on state-by-state polling.

Crucially, Trump is doing poorly in three states that were key to his 2016 win: Wisconsin (56% disapproval), Michigan (54% disapproval) and Pennsylvania (52% disapproval).

His 2020 fundraising is going well, however

Trump’s 2020 re-election campaign raised over $16 million in individual contributions by June of this year. Over half of those donations came from small dollar donors who gave $200 or less, according to documents from the Federal Election Commission.

And the Republican National Committee, which has strictly aligned itself with Trump, has repeatedly smashed fundraising records. In August, the organization raised a record $16.4 million. In total, it has raised over $250 million for this election cycle.

Brian Ballard, a Florida lobbyist and GOP fundraiser who chaired the Trump Victory Organization in Florida in 2016 and is now vice chairman on the RNC finance team, attributed a large chunk of this success to the President. “I find a lot of unity right now,” said Ballard of Republican donors. “[RNC Chairwoman Ronna Romney McDaniel] has a product to sell and the president is a great product.”

And the economy is still going strong

The best numbers for Trump come from economists, however.

In September, the U.S. unemployment rate fell to 3.7%, the lowest it’s been since December of 1969. Economists predict it will fall even further in the next few months.

The average monthly job growth remains strong. Though not as good as Obama’s second term, the monthly numbers are still beating estimates from the Congressional Budget Office from the start of 2017.

Other indicators show a healthy economy. The stock market remains strong, despite Trump’s sparring with China over tariffs; gross domestic product is higher than predicted at the start of 2017; and the poverty rate continues to decline.

If these trends continue, Trump will have a strong argument to make that he’s presided over a good economy when he runs for re-election. 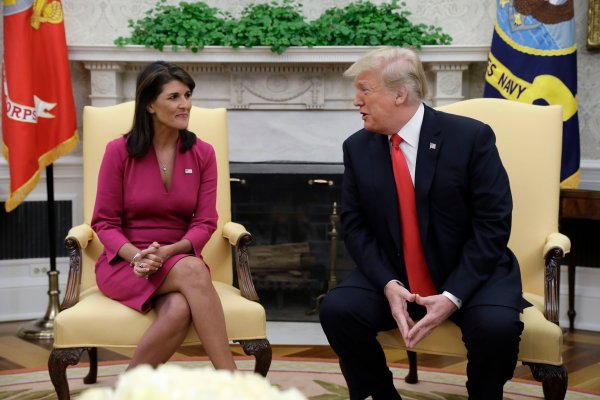 Nikki Haley Boasted That the U.S. Is More Respected Under Trump. Polls Say Otherwise
Next Up: Editor's Pick