Jimmy Kimmel may be Matt Damon’s faux-mortal enemy, but that didn’t stop him from bidding him happy birthday. Of course, Kimmel wished Damon a happy 60th birthday when the actor is only 48.

“The big 6-0. I have to admit he looks pretty good for 60,” Kimmel said. “This year for his birthday, Matt wished for the same thing he wishes for every year – talent.” It continued from there with another closing sick burn.

It’s the latest installment in the infamous 12-year feud between the A-list actor and the late night talk show host that dates back to the third season of Jimmy Kimmel Live! when the host apologized to Damon for bumping him from the show—even though he had never been booked in the first place. From there it has blossomed and their very public spat has played out on The Tonight Show, the Emmy Awards, and even the Oscars. Back in 2016, they even tried to go to couples’ therapy to work on their relationship, but it appears it was too late for the rivals to patch things up.

While Kimmel’s double-edged birthday wish was the latest volley in their ongoing feud, it was nothing compared to what happened on Kimmel’s birthday. Not only did everyone from Jennifer Lawrence to Kim Kardashian and Stephen Colbert read mean tweets about him, but Matt Damon, J.J. Abrams, and Jennifer Aniston turned the super hero comic book Kimmel wrote when he was a 10-year old kid into a movie trailer with Damon noting that the characters “were created by a weird, sad kid who grew to later become a weird, fat man.” 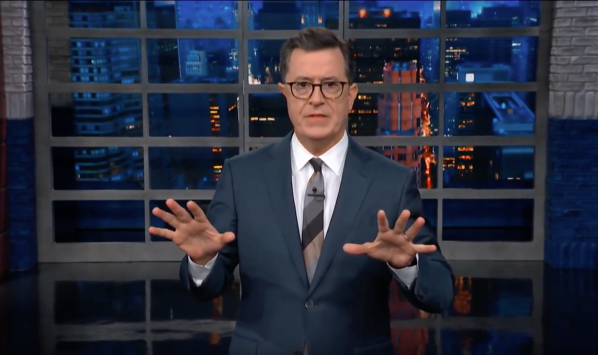 'I've Had More Thorough Investigations to Find My AirPods.' Colbert Slams FBI Report on Kavanaugh
Next Up: Editor's Pick