When Neil Armstrong Went to the Moon, He Brought Souvenirs of the Wright Brothers' Flight. Now They're for Sale

Apollo 11 mission commander Neil Armstrong puts on and checks out each element of his spacesuit before lift-off in July of 1969.
CORBIS/Corbis—Getty Images
By Olivia B. Waxman

In July of 1969, as Neil Armstrong and his crew headed toward the moon, the pioneering astronaut carried with him a very special souvenir, as an homage to another set of pioneers who paved his way. Armstrong had with him remnants of fabric and the propeller of the Wright Flyer, the craft flown by Armstrong’s fellow Ohioans Wilbur and Orville Wright when they succeeded in taking the first powered flight on Dec. 17, 1903, in Kitty Hawk, N.C.

Amid the nostalgia generated by the upcoming 50th anniversary of Armstrong’s having become the first man to step foot on the lunar surface and this week’s release of the biopic First Man, more than 3,000 items from the deceased astronaut’s personal collection are being put up for auction, with bidding starting Friday. Among those items are four pieces of original muslin fabric and two pieces of propeller from the history-making Wright Brothers aircraft. Each of the propeller pieces could fetch $100,000, and each piece of fabric $50,000, according to Todd Imhof, Executive Vice President of Heritage Auctions.

The Wright Brothers souvenirs were some of the items in Armstrong’s “personal preference kit,” a small bag of belongings of personal significance that each astronaut could bring onto the lunar module. The Wright Brothers artifacts came to Armstrong through an arrangement with the U.S. Air Force Museum, per James R. Hansen’s Armstrong biography.

Some of the Wright aircraft parts he took with him were donated to the Smithsonian after the fact, but he got to keep some parts too. Armstrong had always admired the Wright brothers. In the walk-up to the centennial of the takeoff in Kitty Hawk, he described himself as a “devotee” of theirs who “had read much of their early recorded statements and letters and memos.”

The media was eager to compare and contrast the two historic flights.

In an essay titled “On Courage in the Lunar Age,” published in the July 25, 1969, issue of TIME, the magazine noted one big way the astronauts’ flight differed from that of the Wright brothers: “The superorganized voyage of Apollo 11 suggests that lone, individual courage belongs to the past,” TIME argued. “The astronauts often seem to be interchangeable parts of a vast mechanism. They are buffered by a thousand protective devices, encased in layers of metal and wires and transistors, their very heartbeats monitored for deviation. Most of their decisions are made by computers. Hundreds of ships, planes, doctors and technicians stand by to rescue them from error. All this is strikingly different from the lonely struggles of the ancient mariners and American pioneers, the early Polar explorers like Scott and Peary, the early aviators like the Wright brothers and Lindbergh. To many of today’s young, who view courage in moral terms as a battle against impersonal organization, the astronauts do not seem particularly heroic precisely because they epitomize the organization man.”

On the other hand, one reader noticed a similarity between the two flights that rings true in 2018: “Much as the Wright brothers‘ first flight and Lindbergh’s epic changed forever the environment of man on earth, so will the moon landing change forever man’s dependence upon his own earth for survival. The cosmos is his. Its vastness, which holds all the answers to life and death, is but now space to be transited in this effort.” 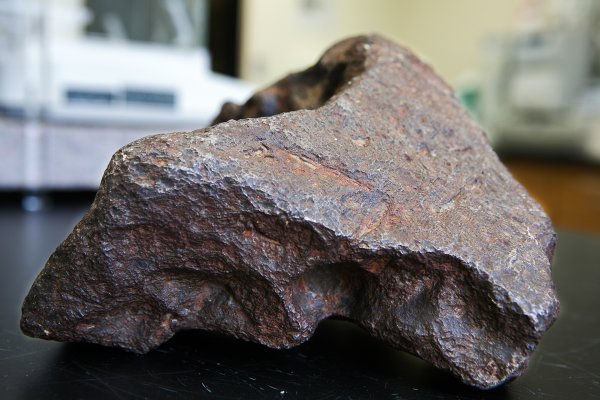 Man Uses Meteorite Worth $100,000 As Doorstop for 30 Years Before Finding Out It's a Very Big Deal
Next Up: Editor's Pick