(Bloomberg) — President Donald Trump says he hopes to see North Korean leader Kim Jong Un “in the near future” after his top diplomat reported progress Sunday at a meeting with Kim in Pyongyang held to resolve details over a potential second summit.

Secretary of State Michael Pompeo told South Korean President Moon Jae-in upon his arrival in Seoul that Kim had agreed to meet with Trump “as soon as possible,” according to a statement from Moon’s office.

The South Koreans said the U.S. and North Korea discussed establishing formal negotiating groups to set a “denuclearization process” and work out a time and location for a follow-up meeting to the first Trump-Kim summit in June.

“As President Trump said, there are many steps along the way and we took one of them today,” Pompeo told Moon in Seoul, in remarks that offered only a broad assessment of his talks with Kim. “It was another step forward.”

Pompeo “had a good meeting with Chairman Kim today in Pyongyang,” Trump said Sunday on Twitter. “Progress made on Singapore Summit Agreements! I look forward to seeing Chairman Kim again, in the near future.”

Pompeo and Kim “refined options for the location and date” of their next summit, and they agreed to instruct their respective working-level teams to meet soon to intensify discussions on the key remaining issues, State Department spokeswoman Heather Nauert said in a statement. Kim also invited inspectors to visit the Punggye Ri nuclear test site to confirm that it has been irreversibly dismantled, Nauert said.

A U.S. official told reporters traveling with Pompeo that the visit to North Korea was “better than” Pompeo’s fraught previous trip to the North Korean capital in July, while adding there was a “long haul” ahead.

The trip was the latest turn in a diplomatic saga that saw Trump and Kim threaten each other with nuclear war last year only for them to hold their historic summit in Singapore. While the leaders signed a vague agreement to “work toward complete denuclearization of the Korean Peninsula, the two sides have bickered over the pace and sequence of steps to achieve that goal.

Pompeo’s brief visit wasn’t expected to resolve critical issues over to get North Korea to disarm or make much progress on a peace treaty to formally end the Korean War. Kim’s regime has said it wants to focus on more than just its nuclear program, and that it expects the U.S. to show some flexibility with its demands.

Pompeo and Kim met for about two hours and then had a 90-minute working lunch, starting with this exchange in front of reporters:

“It’s a very nice day that promises a good future,” Kim said, “for both countries.”

Pompeo replied: “So we had a great, great visit this morning. Thank you for hosting, President Trump sends his regards. And we had a very successful morning.”

Pompeo landed in Pyongyang on Sunday morning to meet Kim after visiting Japanese Prime Minister Shinzo Abe on Saturday in Tokyo. Pompeo will continue traveling to Beijing and then return to Washington on Monday.

In a sign of the modest objectives of the trip, Pompeo told a reporter en route to Japan that one of his goals would be to “make sure that we understand what each side is truly trying to achieve,” a comment that signaled the two countries were still a long way off from detailed negotiations on verified disarmament.

In Tokyo, Pompeo told Abe that the U.S. wanted to work closely on nuclear talks and that he would raise with the North Koreans the issue of Japanese abductees held for decades by the regime.

The Sunday stop in Pyongyang was Pompeo’s first chance to introduce his special envoy for North Korea, Stephen Biegun, to leaders there. Pompeo had hoped to do that in August, when he appointed Biegun and announced they would travel to the country. But Trump called off the trip a day later, saying North Korea hadn’t made sufficient progress toward denuclearization.

It was Pompeo’s fourth trip to Pyongyang and his first visit since July, when he spent the night and left with little to show for his journey. Soon after the secretary of state left the country on his last visit, North Korea issued a statement lambasting his “gangster-like” demands.

Kim Song Hye, who had accompanied top North Korean official Kim Yong Chol on his June White House visit, described Trump as “generous” and “a leader” during staff-level discussions in Pyongyang. She also said she believed the two countries “wouldn’t be here without Trump.”

Despite public criticism from analysts that the U.S. has obtained little on the disarmament front, Trump and his team point to a lack of nuclear and missile tests since late last year as signs that their strategy is working. And at a news conference last month, Trump claimed that there is more progress behind the scenes than the public recognizes. Pompeo has said the U.S. is “making the progress we need.”

In recent weeks, U.S. officials have pointed to a recent meeting in Pyongyang between Kim and Moon, when North Korea committed to dismantling a missile-engine-testing site and raised the possibility of doing the same at its Yongbyon nuclear-enrichment facility.

“We continue to make progress on agreements made at Singapore summit,” Pompeo tweeted shortly after arriving in Seoul. 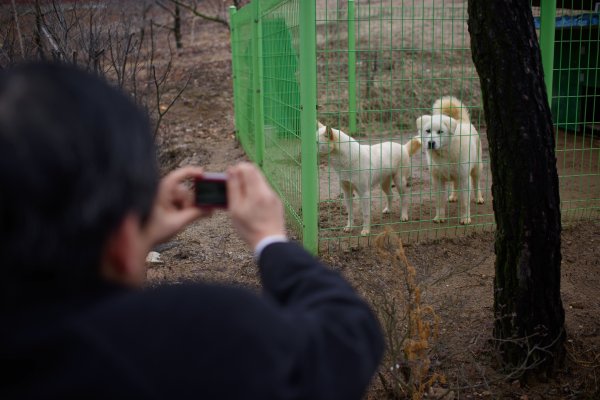