Perhaps the most celebrated U.S. soldier from Word War I, Alvin York, wrote these words on his on his draft registration card: “don’t want to fight.” But York did fight. And 100 years ago this Monday, the once-maligned pacifist single-handedly killed 25 and captured 132 of the enemy, forcing the German Army to retreat from their position in France’s Argonne Forest. He returned home a national hero.

Home for York was northern Tennessee, where he was born in a log cabin in 1887. The need for his labor ended his formal schooling at the third grade. As a young man, he became a binge-drinking weekend patron of illicit moonshine bars where violence often erupted, and in which he sometimes partook. He attended church only because it was the one place where he was allowed to socialize with the girl he liked.

In time, though, York’s religion became not only genuine but also ardent, especially after a New Year’s Day 1915 sermon from a visiting preacher left him feeling as if “lightning struck his soul.” He abandoned the moonshine and brawling, and soon became an assistant pastor. Though it improved his behavior, York’s particular religiosity brought its own set of problems when World War I erupted and the time arrived for military drafts. On moral grounds, the young man decided that he could not kill another human being, and so he sought exemption from combat. The military, however, denied his request.

York reluctantly entered the U.S. Army on Nov. 14, 1917, and became a member of the 82nd Infantry Division. His disciplined living and superior shooting ability saw him promoted. But he still grappled with his pacifism, which he discussed with two very religious superior officers, who worked to convince him that one could both follow the Bible and kill for one’s nation. But as word spread about York’s pacifist tendencies, other soldiers began to ostracize and openly ridicule him.

Such disapproval ended forever due to his Oct. 8, 1918, actions outside the village of Chatel-Chehery in northeastern France, in combat that was part of the long and bloody Meuse-Argonne Offensive against the Germans.

As York witnessed the death and wounding of several in his unit, he saw that he must fight and kill in order to prevent further bloodshed among his fellow American soldiers.

Having crossed this moral dilemma, plenty of physical obstacles remained, such as charging up a hill against machine gun fire. At one point, York was facing 19 German soldiers (some sources say 18) by himself. Unfazed, the crack marksman killed them all. A second wave of German soldiers desperately charged him with bayonets. York shot them down. At this point, a German lieutenant — deeply affected by the agony and pleading of a fellow officer — blew a whistle and ordered the remaining soldiers in his battalion to surrender, as related by Douglas V. Mastriano, author of Alvin York: A New Biography of the Hero of the Argonne.

York marched 132 German prisoners back to his astounded commanding officer. In this battle that made his name a synonym for wartime courage, York reported that he “never got a scratch.”

The unscathed hero received high military honors from such Allied nations as France, Italy and Montenegro. The U.S. awarded him the Medal of Honor in March 1919. However, his phenomenal feat had gone largely unnoticed by the American public — until an article detailing his bravery and marksmanship appeared in an April 1919 issue of The Saturday Evening Post.

Returning home as a national sensation in May 1919, York almost immediately married Gracie Loretta Williams, the young lady who had enticed him to attend church; they would proceed to have eight children.

His fame saw a renewal in 1941, with the release of the immensely successful movie Sergeant York, in which actor Gary Cooper played the eponymous role.

York sought to return to combat in WWII, but the U.S. Army denied him re-enlistment based on his age (then 54), along with his being overweight and manifesting other physical ailments. Forced to accept a noncombat role, he visited training camps and participated in fundraising events.

For a long time, York remained active in raising money for his Tennessee region, where many residents lived below the poverty line. The highlight of his community endeavors was his founding of the Alvin C. York Industrial School in Jamestown, Tenn., for the purpose of teaching modern job skills to the next generation. This school — now known as the Alvin C. York Institute — endures to this day as a tribute to a combat legend who wanted foremost to be remembered “for improving education in Tennessee.”

York — who had spent the last decade of his life in a wheelchair after suffering a series of strokes — died in 1964, at age 76. Though he had sought to downplay his battlefield exploits, he remains a war hero and an example to other soldiers who sometimes must kill for the sake of their countrymen. 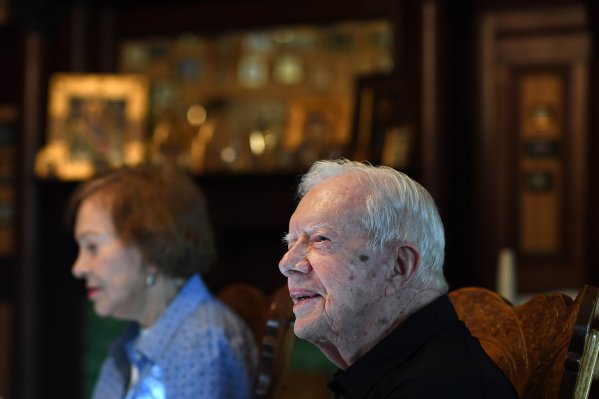 Former President Jimmy Carter Is Still Building His Legacy, One Home at a Time
Next Up: Editor's Pick