In a widely anticipated decision, Republican Sen. Susan Collins of Maine said Friday that she would vote to confirm Supreme Court nominee Brett Kavanaugh. Her decision means that Kavanaugh, who faces multiple accusations of sexual misconduct, is all but assured to be confirmed to the Supreme Court when the Senate votes this weekend.

“I will vote to confirm Judge Kavanaugh,” Collins said at the end of a 45-minute speech laying out her argument for supporting the judge. During the speech, she spoke in detail about Kavanaugh’s record and explained that she believed he was a qualified justice.

When Collins got to the recent allegations against Kavanaugh, she said that she believed some more than others. While she did not believe allegations that Kavanaugh had been at parties where girls were gang raped, she said she took more seriously the testimony of Christine Blasey Ford, the California psychology professor who accused Kavanaugh of sexually assaulting her when the two were in high school. Collins said she believes that Ford is a survivor of assault, but that there was not enough evidence to convince the Senator that Kavanaugh was involved. A “presumption of innocence and fairness” had to prevail, she said.

“I do not believe that these charges can fairly prevent Judge Kavanaugh from serving on the court,” Collins said.

Immediately after Collins completed her speech, West Virginia Sen. Joe Manchin, the lone holdout in the chamber, announced that he would break with his Democratic colleagues and also vote for Kavanaugh. “I have reservations about this vote given the serious accusations against Judge Kavanaugh and the temperament he displayed in the hearing. And my heart goes out to anyone who has experienced any type of sexual assault in their life. However, based on all of the information I have available to me, including the recently completed FBI report, I have found Judge Kavanaugh to be a qualified jurist who will follow the Constitution and determine cases based on the legal findings before him,” Manchin said in a written statement.

Collins’ speech came after Arizona Sen. Jeff Flake, another key Republican swing vote, said earlier Friday he would also vote for Kavanaugh barring any major unforeseen events. With Flake, Collins and Manchin on board, Kavanaugh will very likely have 51 votes in favor and will not need Vice President Mike Pence to cast a tie-breaking vote.

Protesters opposing and in favor of Kavanaugh lined up both alongside and inside Collins office in the hours preceding her announcement. Demonstrators wore pins that read “I said believe Christine Blasey Ford” and held signs that said “We will not be silent” while others wore shirts emblazoned with “Confirm Kavanaugh.” Some had “vote no” written on their arms. Inside her office, demonstrators were telling their own stories and writing notes to the Senator describing their own experiences.

“I’m a survivor of sexual assault, my story is not dissimilar to Dr. Fords,” Chelsea Pace, who was standing outside of Collins’ office with her husband, said tearfully. “It’s been a really tough week. It’s never been an easy time to be a survivor of sexual assault .. to have a judicial system thats designed to believe men over women, to believe perpetrators over survivors, it’s kind of debilitating.”

When Collins stood up to make her speech on the Senate floor Friday afternoon, people in the gallery shouted loudly and had to be told they were not allowed to express approval or disapproval before she could begin. A police detail was stationed outside Collins’ office and appeared to be clearing those spectators standing outside during her speech. Although the hallway soon opened, her office was surrounded by five police officers after she had finished speaking.

The morning began with the Senate advancing Kavanaugh in a key procedural vote, during which one key Republican, Sen. Lisa Murkowski of Alaska, broke with her party to vote “no” and one Democrat, Sen. Joe Manchin of West Virginia, voted “yes.”

Sen. Joe Manchin (D-WV) walks to the Senate floor for a cloture vote on the nomination of Supreme Court Judge Brett Kavanaugh to the U.S. Supreme Court, at the U.S. Capitol, October 5, 2018 in Washington, DC.
Drew Angerer—Getty Images

Murkowski told reporters after she cast her vote Friday morning that she did not reach her decision until walking into the chamber. “I believe he is a good man,” she said of Kavanaugh. “It just may be that in my view he’s not the right man for the court at this time.”

The Republicans had expected their voting math to be complicated by the fact that Montana Sen. Steve Daines will be attending his daughter’s wedding on Saturday and has said he promised to walk her down the aisle. Daines said that if he needs to fly back to be the deciding vote in support of Kavanaugh, he would be using Rep. Greg Gianforte’s private plane—but after Collins’ and Manchins’ announcements, it looked like that would be unnecessary.

Democratic Sen. Heidi Heitkamp, who had previously been undecided on the nomination, said Thursday after reading the FBI report that she would vote against Kavanaugh’s nomination, and she voted “no” on the procedural vote Friday morning.

The Friday morning vote came one day after the FBI released its new report into the sexual misconduct allegations against Kavanaugh. Last week, Kavanaugh and Christine Blasey Ford, who has accused the judge of sexually assaulting her when they were teenagers, testified in front of the Senate Judiciary Committee.

But after the emotional day-long testimonies, Democratic Senators called for the FBI to investigate the allegations against Kavanaugh before lawmakers voted on his confirmation. The bureau re-opened its background check into the nominee after Flake and other undecided Republican Senators joined this call for more information before voting on Kavanaugh.

When the FBI gave Senators its report on Thursday, Republicans said it included no new information while Democrats called the report “incomplete” and suggested the White House had limited the agency’s ability to investigate.

In an unusual step, Kavanaugh himself wrote an opinion piece in The Wall Street Journal on Thursday night before the procedural vote, trying to reassure lawmakers that he would be an “independent, impartial judge.” Still, partisan tensions were evident in the chamber even before the vote on Friday. “Before left wing outside groups and Democratic leaders had him in their sight, Judge Kavanaugh possessed an impeccable reputation and was held in high esteem,” Judiciary Chairman Chuck Grassley said on the Senate floor Friday morning.

Before procedural vote, President Donald Trump tweeted criticisms of the protestors who have filled the Capitol in recent days, saying they were only there to “make Senators look bad.”

After the vote, the President appeared more satisfied. “Very proud of the U.S. Senate for voting “YES” to advance the nomination of Judge Brett Kavanaugh!” he tweeted.

Collins told reporters after her speech that she had made her decision last night after she finished reading the FBI report.

She was widely praised by her colleagues after her speech, not only for the conclusion she reached but the thorough process she had gone through to get there.

“It will go down in history as one of the most thoughtful, reasoned explanations of support of a Supreme Court nominee,” said South Carolina Sen. Lindsey Graham, who sits on the judiciary committee. “Unlike most Kavanaugh critics, she actually took the time to do her job.”

Sen. Thom Tillis, another member of judiciary committee, said he did not know how Collins was going to vote until her speech, although he had an inkling she would be supporting Kavanaugh after she voted for cloture. “What I observed was probably bar none the most exhaustive process she was going through,” he told TIME. 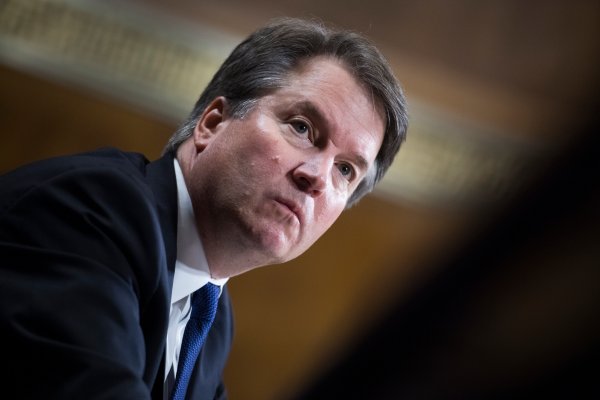 Kavanaugh Says He ‘Said a Few Things I Should Not Have Said’
Next Up: Editor's Pick