The statue, which is called “Women’s Column of Strength, depicts three young women from Korea, China and the Philippines, standing in a circle. Osaka mayor Hirofumi Yoshimura said the work “destroyed the two sides’ relationship of trust.”

During World War II, Japan forced thousands of women and girls — known euphemistically as comfort women — to work as sex slaves in military brothels. Dozens of memorials have been erected throughout South Korea and elsewhere, but San Francisco’s commemorative statue is the first to appear in a major U.S. city, the New York Times reports.

The subject has long exasperated Japan, which recalled one of its envoys to South Korea over a similar statue. In 2016, Japanese Foreign Minister Fumio Kishida said, “The term sex slaves doesn’t match the facts.”

In a 10-page letter, mayor Yoshimura detailed his grievances to San Francisco’s mayor, London Breed, saying there was a historical disagreement over the matter and that the perpetrators of sexual abuse against women went beyond just Japan.

“I am in favor of activities to protect the dignity and human rights of women,” he said. “However, if the purpose is to protect the human rights of women, I would suggest that some of the special attention currently being given to Japan’s ‘comfort women’ issue should be broadened to memorialize all the women who have been sexually assaulted and abused by soldiers of countries in the world.”

Yoshimura originally announced his decision to end the sister-city relationship when the statue was erected privately in November in San Francisco’s Chinatown district as public property. But the move was delayed following the death of San Francisco Mayor Ed Lee in December.

On Thursday, Breed said in a statement that one mayor “cannot unilaterally end a relationship that exists between the people of our two cities.”

San Francisco and Osaka have been sister cities since October 1957. 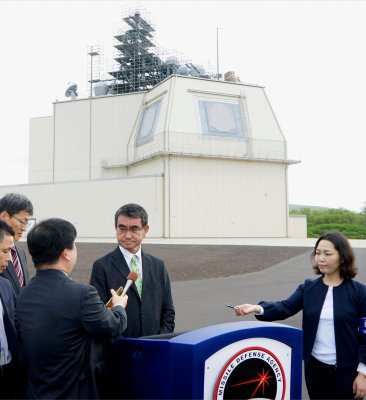 Why Japan Is Scrapping a U.S. Anti-Missile System
EDIT POST