Police have identified the suspected gunman who is accused of killing one police officer and injuring six others in a shooting in Florence, South Carolina Wednesday.

The suspected shooter was identified as Frederick Hopkins, a 74-year-old disbarred lawyer who has been charged with several offenses since 2014, the Associated Press reports.

Hopkins in 2014 was charged with a count of disorderly conduct, according to the AP. In 2015 and 2017, he was charged for “running at large,” which is related to an offense committed when one doesn’t restrain their animals.

WMBF reports Hopkins sustained a head injury during the police standoff and was taken to a local hospital for treatment.

Hopkins was a Vietnam War veteran and an avid amateur marksman, according to AP. He posted photos on Facebook of guns set up for target practice, and in 2014 celebrated his birthday at a shooting range where he compared his M14 rifle to “the one I used in Vietnam.”

Hopkins lost his law license over $18,000 in wrongfully billed attorney fees, AP reports. A State Supreme Court ruling in 1984 allowed him to pay back the debt over time rather than serve a six-month jail term.

The shooting in Florence ended in a two-hour standoff in a neighborhood where the shooter took children hostage inside a house. None of the children were reported to have been injured in the shooting.

Three deputies for Florence County were shot from inside the house when they tried to serve a warrant around 4 p.m. Wednesday. The gunman then shot four Florence city police officers, including one fatally, as authorities arrived to help the deputies.

The officer who died in the shooting Wednesday was identified as Terrence Carraway. The 52-year-old officer had served in Florence for 30 years, the AP reports.

A candlelight vigil was held in Carraway’s honor Thursday at a local church, AP reports. 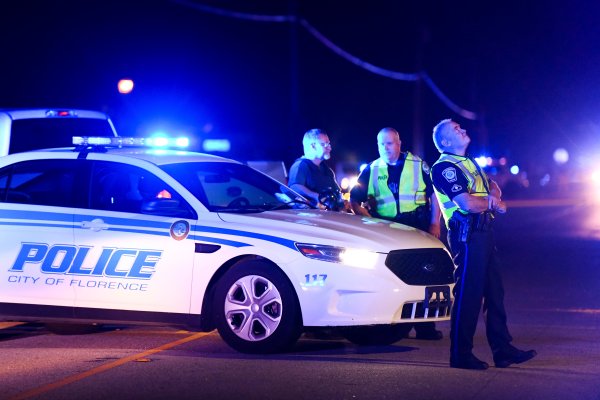