Oil Companies Say They’re Going Green. Here’s What that Would Mean for the Fight Against Climate Change

This photo shows oil rigs in the Loco Hills field in Eddy County, near Artesia, New Mexico, on April 9, 2018. This is one of the most active regions of the Permian Basin, the home of the U.S. oil boom.
Jeri Clausing—AP/REX/Shutterstock
Ideas
By Justin Worland
Justin Worland is a Washington D.C.-based senior correspondent for TIME covering climate change and the intersection of policy, politics and society.

President Trump has repeatedly repudiated the Paris Agreement on climate change and panned the science that underpins it. But oil companies have moved in the other direction, saying they want to address the issue. The evidence of this development can be found in the oil fields of the Permian Basin, which is the home of the U.S. oil boom and where Occidental Petroleum has major operations.

The oil there will soon be used as one might expect: to help power your car, fly a jetliner or form the feedstock of myriad consumer products, thus releasing carbon dioxide, which is the primary driver of global warming. But if Occidental — better known as Oxy — succeeds in carrying out its long-term vision, the site will also keep man-made carbon from driving climate change.

For Oxy, the math is simple. The oil field here, just five miles from the Texas border, is in a region that was recently considered tapped out and unprofitable. By injecting carbon dioxide into the field, the company both frees up oil, helping its bottom line, and stores CO2 underground, keeping it from contributing to climate change. In total, the company annually stores the amount of CO2 equivalent to the emissions of a small state like Hawaii or Maine. Occidental has used this process for years, mostly using carbon dioxide from natural rather than man-made sources, but the company wants to expand the program and increase the amount of man-made carbon it stores. Carbon-capture technology — like this and others — is a leading climate-change solution, the company says.

“Carbon capture has to happen and it has to happen in a big way,” Oxy CEO Vicki Holub told TIME from the company’s Houston headquarters. “There’s no way we can cap global warming by the 2° that was discussed in the Paris Accord without carbon capture.”

Oxy is not alone. The initiative comes as policymakers, scientists and activists increasingly grapple with how to treat oil companies. While science shows that the world must wean itself from the fossil fuel, much of the global economy depends on it, making an overnight transition impossible. The International Energy Agency, an intergovernmental agency, shows oil demand growing through 2023 as the metric continues to align with economic growth. At the same time, a group of leading scientists suggest that greenhouse gas emissions need to peak by 2020.

That reckoning has driven oil and gas companies to position themselves as part of the solution to addressing climate change. On Sept. 24, Oxy, ExxonMobil and Chevron formally joined a coalition of some of the world’s biggest energy companies in the Oil and Gas Climate Initiative (OGCI). The group, which has committed $1 billion to funding promising energy ventures to reduce emissions, announced a goal to cut their release of methane, the second most prevalent greenhouse gas, by one-third by 2025. The move on methane contrasts sharply with those of the Trump Administration, which has sought to reverse a slew of regulations aimed at tackling methane emissions.

Many climate-change activists and policymakers remain wary. The oil industry has a long history of working to slow efforts to combat climate change, with tactics including the spreading of false information about the science. Even today, as companies acknowledge the reality of global warming, their SEC filings list climate regulation as a potential threat.

“The best way to address climate change is to aggressively decline our burning of fossil fuels,” says Jesse Bragg, an activist at Corporate Accountability. “We need to force them.”

But there’s reason to believe that these same companies now want to be part of the solution. They see regulation coming — and say it’s better to get a solution that allows their businesses to persist.

Despite Trump’s regulatory rollbacks, companies with global operations already face stringent climate rules in places like the E.U. And most key players believe it won’t be long before a Democrat or moderate Republican acts in the U.S. Even as Trump denies the science of climate change, talk of carbon pricing legislation like a carbon tax or cap and trade legislation has entered some Republican circles on Capitol Hill. And those policies could to fruition even without the federal government. Washington State, for instance, will vote on a carbon tax this November.

“Ultimately, there will be a carbon price,” says Holub, referring to the policy tool economists commonly recommend to reduce emissions. She says that once that’s the case, Oxy’s strategy “would be an advantage.”

The most pragmatic members of the climate community say they will work with oil where they can. Groups like the Environmental Defense Fund, which has sought to help oil companies monitor methane emissions across their operations, have embraced that spirit. “We need to engage with all the actors,” Patricia Espinosa, head of the U.N. climate-change body, told TIME at an oil and gas conference this year.

But others focus on the big changes the industry will need to undergo. According to them, major oil companies need to further efforts to track and report emissions, something the OGCI consortium says it is working to improve. Then the companies need to align their climate programs with the science of climate change. That means grappling with the biggest challenge yet: admitting that oil consumption needs to peak and then decline — and do so sooner rather than later. A report released last year by the Energy Transitions Commission — a group of leading climate advocates focused on market-based solutions — suggests that oil demand needs to fall around 30% by 2040 to meet the goals of the Paris Agreement.

For oil companies, that reality is the “elephant in the room,” says Nigel Topping, CEO of We Mean Business, a group dedicated to helping the private sector act on climate change. “We know the end state. It’s a question of how we manage the transition.” 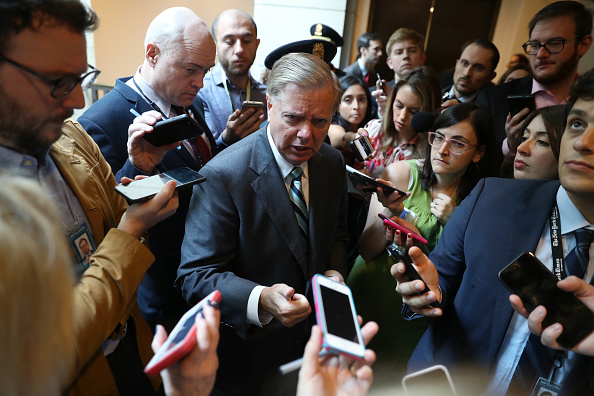 'Why Don't We Dunk Him in Water and See If He Floats.' Lindsey Graham Fires Back at Kavanaugh Protestor
Next Up: Editor's Pick