Has Anything Changed For American Women Since 2016?

There she was: a professional blond woman, speaking carefully, trying to say only what she knew to be true. There he was: an angry and red-faced man, shouting accusations about partisan conspiracies. Her allies asked why a man accused of sexual assault should sit in one of the most powerful seats in the nation. His found reasons to ask if this woman could really be trusted.

It was like watching a re-enactment of the 2016 election, all in one day. Christine Blasey Ford’s testimony to the Senate Judiciary Committee about her alleged sexual assault by Brett Kavanaugh and the judge’s furious rebuttal dredged up all the questions about truth, gender and power that defined the 2016 battle between Hillary Clinton and Donald Trump. Two years after an election that hinged on what women are allowed to achieve and what men are allowed to get away with, the hearing was a reminder to many that a man can still get away with a lot.

To American feminists, the 2016 campaign offered bitter lessons. That the nation would look the other way on allegations of sexual assault. That women didn’t have the kind of cohesive political power that was needed to elect a female President. That in the brutal economy of he said, she said, some people’s words have more value than others’, and it is almost always her words that are valued less. Trump won in 2016 despite being accused of sexual misconduct by at least 16 women. A Quinnipiac poll in October of that year found that just over half of voters thought the allegations were true, but less than a third considered them disqualifying. Trump carried 52% of the white women’s vote.

And so Clinton was relegated to hikes in the woods, while a President accused of sexual assault nominated a judge accused of sexual assault to the Supreme Court, a man who conservatives hoped would be the swing vote to overturn or substantially weaken the abortion protections established by Roe v. Wade. It felt like compounded injustice: an alleged abuser nominating another alleged abuser to take away the bodily autonomy of millions of women.

But something has shifted since 2016. On the first full day of Trump’s presidency, nearly 4 million Americans gathered for the Women’s March, likely the largest single-day protest in U.S. history. In the months that followed, women started speaking up about their experiences with sexual assault in a cascade that became the #MeToo movement. Male impunity began to crumble, and powerful figures were toppled. A year after Trump’s election, 89% of voters told Quinnipiac that sexual harassment of women was a serious problem, including large majorities in both parties and both sexes. In that same poll, 62% of voters said they wouldn’t vote for a candidate accused of sexual harassment.

Since Clinton’s defeat, a record number of female candidates have stepped up to run for office themselves. At least 476 filed paperwork to run for the House of Representatives in 2018, three-quarters of them Democrats. Between 30 and 40 new women are poised to win election to the House and Senate in November, according to David Wasserman of the nonpartisan Cook Political Report, which would shatter the record set by the 1992 “Year of the Woman.” Even before Ford came forward, 71% of Democratic women said they were “very motivated” to vote.

That’s why the Sept. 27 hearing had such powerful echoes. Another blond woman, another loud man. Like Clinton, Ford tried to focus on details: she refused to name who pushed her into the bedroom where she says she was assaulted, for example, because she was pushed from behind and couldn’t know for sure. Like Trump, Kavanaugh issued blanket denials while making claims that strained credulity: the self-described treasurer of the “Keg City Club,” testified under oath that he never blacked out from drinking, an assertion some former classmates greeted with skepticism. This time, there are no hacked emails or immigration debates to distort the central question: When she says one thing and he says another, whom does America believe? 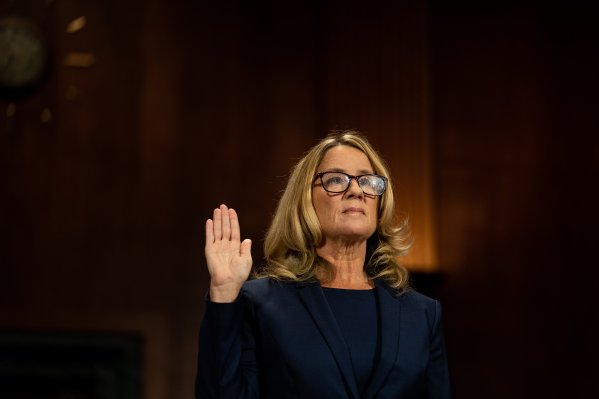