Indonesian soldiers have been instructed to fire on people caught looting in the wake of a deadly 7.5-magnitude earthquake and tsunami as desperation for food, water and fuel grow, a military officer said Wednesday.

Authorities warned survivors against theft in Palu, a city in Indonesia’s central Sulawesi province that bore the brunt of the devastation and is still struggling to recover, Agence France-Presse reports.

“If there is looting again, we will quickly fire a warning shot and then shoot to immobilize,” Colonel Ida Dewa Agung Hadisaputra told AFP. Hadisaputra explained that soldiers had initially tolerated looting in the immediate aftermath of the disaster, when vital resources were badly needed, and aid in short supply.

“But on the third day, they started looting things like electronic equipment,” he said

Police have already detained 92 people in Palu for looting goods, including motor oil, tires, ceramic tiles and farming equipment, the Associated Press reports. Local authorities had previously pleaded with desperate residents to only take food supplies as needed, and promised to compensate shopkeepers for lost goods.

The death toll reached 1,400 on Wednesday, with thousands more injured and hungry since the twin disasters struck Friday. Food, fuel and medication have been slow in reaching distraught survivors, as transport and communication infrastructure sustained heavy damage.

Read more: These Aerial Photos Show Indonesia Before and After the Tsunami

Some 70,000 people are also displaced, national disaster agency spokesman Sutopo Purwo Nugroho said, some after their homes were swept away by a terrifying phenomenon known as liquefaction that causes the earth to behave like a liquid.

In total, 80% of buildings were damaged or destroyed in the area that is home to approximately 200,000 people, according to the U.N. Office for the Coordination of Humanitarian Affairs. 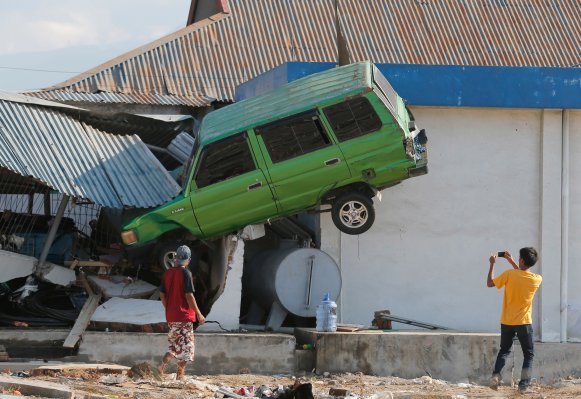