So a horse walked into a bar, but before the bartender could ask, “Why the long face?” the horse charged through the space, bucking her legs, and knocking around tables. It sounds like a joke, but the entire event was caught on the bar’s surveillance camera, so the world could witness the lengths a horse would go just to get a drink.

The young horse had apparently made a bid for freedom from a life at a race track and stable in Chantilly, France, just north of Paris, Ouest France reports. The filly’s trainer Jean-Marie Beguigne told the newspaper that the horse broke free while being led from her stable to the racecourse and has a fondness for running off. After breaking out, the horse headed full steam ahead into a local bar.

Cue up the Cheers theme song: Guess the little horse just wanted to take a break from all her worries.

The horse ran into the bar at what looks like a full gallop, startling the customers and the bartender, sending chairs scattering, bumping into tables, and sending thirsty patrons running for the exits. “There was quite a panic. I still can’t quite believe it happened,” bar owner Stephane Jasmin told Reuters.

Despite the chaos, no one was hurt, not even the horse. The runaway filly ran outside where she was reportedly recovered in a nearby parking lot and hopefully offered a drink. 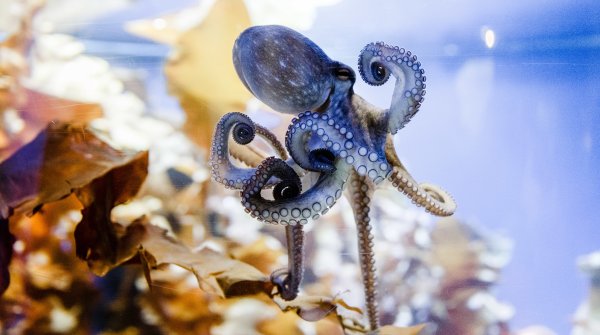 This Man's Face Got in the Middle of a Seal-Octopus Fight
Next Up: Editor's Pick