On Friday, Princess Eugenie married her longtime boyfriend Jack Brooksbank at St. George’s Chapel in Windsor Castle, the same royal wedding spot recently graced by the nuptials of Meghan Markle and Prince Harry in May.

And Prince George, and Princess Charlotte assumed their royal duties as a page boy and bridesmaid.

They have an excellent track record when it comes to stealing the show at important events, and this was no exception.

In pictures, the world famous five-year-old who arrived suited up for page duty in a snappy suit was laughing up a storm with the bridesmaids, with his pal, seven-year-old bridesmaid Savannah Phillips, the daughter of Autumn and Peter Phillips.

And even though three-year-old Charlotte in her dainty dress nearly got blown over by the wind, that didn’t stop her from mastering the royal wave.

According to the BBC, Prince George will later celebrate with a small gathering of friends.

Prince George is third in line to the throne, while Princess Charlotte is fourth.

Eugenie, who is Queen Elizabeth‘s granddaughter, is ninth in line to the throne following her older sister Princess Beatrice, who served as her maid of honor on the big day. The sisters are daughters of Prince Andrew, the Duke of York, the Queen’s second son and Sarah Ferguson, the Duchess of York; they divorced back in 1996, but remain amicable and both attended the autumn wedding.

As many as 1,200 members of the public were invited to apply to attend this latest royal wedding, along with representatives of charities that Eugenie and Brooksbank support and local children from schools Eugenie once attended. Following the official ceremony in the chapel, Eugenie and Brooksbank enjoyed a carriage procession through the town of Windsor, just like Markle and Prince Harry before them. They then headed off to an evening reception at Royal Lodge, Eugenie’s father’s official country residence, with another party scheduled for the following day.

Eugenie, who is not technically a “working royal,” has pursued a career in the arts. She is also a Royal Patron of the Tate Young Patrons and is involved in a number of charities. Brooksbank, whom she met on a ski vacation over seven years ago, was a former nightlife manager with his own royal-adjacent pedigree.

Ahead of the wedding the Royal Family Twitter account shared images of the happy couple as children and on New Year’s Eve.

The original version of this story misstated Princess Charlotte’s place in the line of succession to the British throne. She is fourth in line to the throne, not fifth. 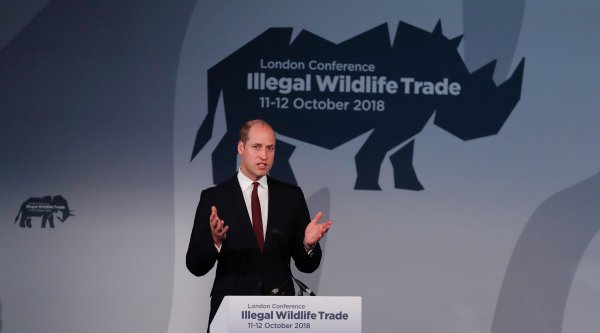