'It Was a Complete Accident.' Guy Whose Gender Reveal Party Started a Wildfire Will Pay Large Fine

Building a family can be an exciting prospect. But maybe it’s time to tone down the gender reveal parties — at least when it comes to the use of actual explosives to celebrate a new baby.

That’s the lesson learned by one Arizona couple who will be fined $220,000 after the husband’s misguided use of an explosive substance lit a 47,000-acre wildfire back in 2017, requiring nearly 800 firefighters to tame the flames and costing the government about $8.2 million, as the Arizona Daily Star reports.

“It was a complete accident,” the man behind the scheme, Border Patrol agent Dennis Dickey, told a judge last week. “I feel absolutely horrible about it. It was probably one of the worst days of my life.” Dickey pled guilty last week to a federal misdemeanor charge for causing the fire, dubbed the Sawmill Fire. (It was not ruled as arson, because it was not a “willful act.”)

Gender reveal parties have been developing into more and more outlandish stunts over the years, as couples surprise guests with the news of the expected baby’s gender. In this case, Dickey shot his rifle at a target that contained colored powder to indicate the gender. The explosive substance was Tannerite, a legal compound, that ignited after being shot. (News reports have not determined the ultimate gender of the baby.)

Unfortunately for Dickey, strong winds and fire-friendly conditions turned his family’s big day into a costly affair. He’ll be paying his fine in installments for the next 20 years, and will spend the next five on probation. 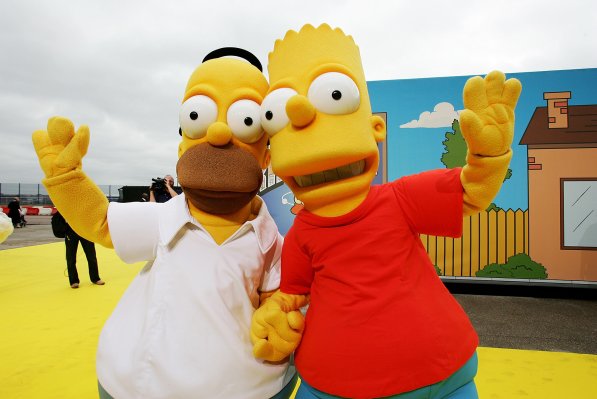 How The Simpsons Winks at a Spooky Theory True Superfans Will Recognize
Next Up: Editor's Pick