The snow-white dogs, one male and one female, were sent south last week as a “symbol of peace,” according to South Korea’s Blue House. Kim reportedly offered the canines during the third inter-Korean summit, held in Pyongyang last month.

The dogs completed a quarantine and passed through the heavily fortified demilitarized zone (DMZ) and the Panmunjom truce village on Thursday, according to the Blue House. Panmunjom is also where the armistice that suspended the Korean War was signed, and where Kim and Moon met in person for the first time in April last year.

The pair of pooches will join South Korea’s incumbent First Dog, Tori, who was adopted by Moon in 2017. Moon also already owns a Pungsan named Maru.

This is not the first time the beloved breed has been bestowed in a diplomatic gesture, according to Reuters. Kim Jong Il gave two Pungsans to South Korean President Kim Dae Jung in 2000 when the two leaders met for the very first inter-Korea summit. 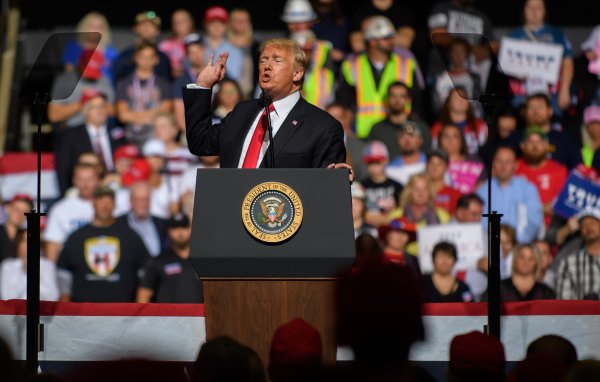 President Trump Says He and Kim Jong-Un 'Fell in Love'
Next Up: Editor's Pick