These Women Confronted Sen. Jeff Flake Over His Support for Kavanaugh. Hours Later, He Shifted His Position

“Don’t look away from me,” Maria Gallagher told the Senator, who has been considered a possible swing vote. “Look at me and tell me that it doesn’t matter what happened to me, that you will let people like that go into the highest court of the land and tell everyone what they can do to their bodies.”

The moment was captured on video and went viral. Hours later, Flake appeared to shift his position. He voted to advance Kavanaugh’s nomination out of the Senate Judiciary Commitee, but indicated he could only vote to confirm Kavanaugh to the country’s highest court if there was an FBI investigation into sexual misconduct claims against him.

He was the last undecided Republican on the committee.

“I have been speaking with a number of people on the other side,” he said. “We had conversations ongoing for a while to making sure that we do due diligence here, and I think it would be proper to delay the floor vote for up to but not more than one week in order to let the FBI continue to do an investigation, limited in time and scope to the current allegations that are there and limit in time to no more than one week.”

Following Thursday’s high-stakes testimony – in which Christine Blasey Ford said in front of the Senate Judiciary Committee that Kavanaugh, allegedly held her down, put his hand over her mouth and tried to remove her clothes more than three decades ago – it did not seem imminently clear the Arizona Republican would vote to approve the nomination. But his opinion was solidified on Friday, according to his statement.

“I believe that the Constitution’s provisions of fairness and due process apply here as well. I will vote to confirm Judge Kavanaugh,” he said.

Flake, a frequent critic of President Donald Trump, appeared to stand up for the California psychology professor on Wednesday prior to the hearing.

“I do not believe the claim of sexual assault is invalid because a 15-year-old girl didn’t report the assault to authorities, as the president of the United States said just two days ago,” Flake, who is not running for re-election this fall, said. “How uniformed and uncaring do we have to be to say things like that, much less believe them?”

During the hearing in front of the committee that is made up of 11 Republicans and 10 Democrats, Flake did not ask any questions.

Right after Flake announced he would vote for Kavanaugh, two women, who said they were sexual assault survivors, confronted him while he was on an elevator.

His vote meant he was “telling all women that they don’t matter, that they should just stay quiet,” one woman said. “Look at me when I’m talking to you. You are telling me that my assault doesn’t matter,” she added.

Flake looked uncomfortable as they spoke to him.

All eleven Republican committee members, including Flake, voted yes on nomination. All ten Democrats voted no. 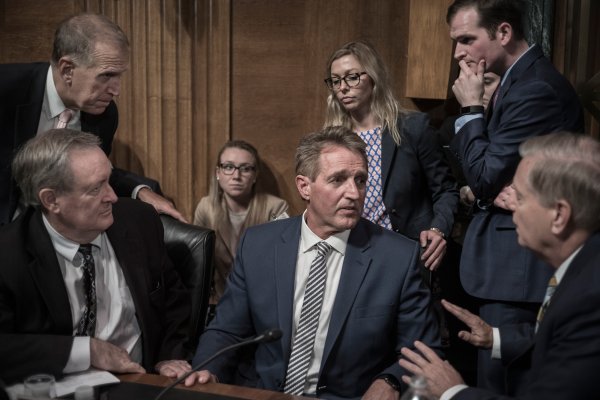