Amal Clooney speaks about journalists imprisoned in Myanmar at the Press Behind Bars: Undermining Justice and Democracy event during the 73rd session of the United Nations General Assembly at the United Nations in New York on Sept. 28, 2018.
Angela Weiss—AFP/Getty Images
By Katie Reilly

Human rights lawyer Amal Clooney on Friday called on Myanmar’s leader Aung San Suu Kyi to pardon two journalists who were sentenced to seven years in prison this month after reporting on the killing of Rohingya Muslims in the country, warning that “history will judge her on her response.”

Clooney is representing Reuters reporters Wa Lone, 32, and Kyaw Soe Oo, 28 — whose arrest in December 2017 was widely viewed as retribution for their reporting on the killing of 10 Rohingya men in Myanmar’s Rakhine State. They were found guilty on Sept. 3 of possessing state secrets — the conclusion of what Clooney described as a “sham trial.”

Suu Kyi, who once represented the country’s promising progression toward democracy, has faced international scrutiny for failing to stop or condemn the violence against Rohingya Muslims. Earlier this month, she denied that Wa Lone and Kyaw Soe Oo were jailed because they were journalists and said anyone who disagrees should “point out why the judgment was wrong.”

“My remarks today are intended to answer Aung San Suu Kyi’s call,” Clooney said Friday, speaking at panel on press freedom at the United Nations. (Clooney has been married to Hollywood actor George Clooney since 2014.)

“She knows that mass murder is not a state secret and that exposing it doesn’t turn a journalist into a spy,” Amal Clooney said. “She is the Nobel Peace Prize winner whose name was whispered in the halls of St. Hugh’s College, Oxford, where she and I both studied. When I was a student, she was a hero to me, as she has been to so many human rights advocates around the world and to so many of the 50 million people in Myanmar, whose lives she promised to change.”

“Aung San Suu Kyi knows better than anyone what it is like to be a political prisoner in Myanmar. She has slept in a cell at the prison where Wa Lone and Kyaw Soe Oo now sleep,” Clooney added. “But today, she holds the key… History will judge her on her response.”

Earlier this month, an independent fact-finding mission by the United Nations accused Myanmar’s military of carrying out brutal mass killings and gang rapes of thousands of Rohingya civilians, calling for top military leaders to be prosecuted for “genocide, crimes against humanity and war crimes.”

Advocates have condemned the Reuters reporters’ imprisonment as a crackdown on free press. “We’re supporting them all the way, and we’re not going to give up until they’re out,” Reuters Editor-in-Chief Steve Adler told TIME on Friday. “I’m looking forward to thanking them in person when they’re out.”

Attacks on press freedom have been a growing problem across Southeast Asia and around the world. There were 262 journalists imprisoned last year, according to the Committee to Protect Journalist, reaching “unprecedented levels.”

Clooney said Friday that the families of Wa Lone and Kyaw Soe Oo have submitted a request for their pardon — which she said Myanmar’s president can grant at any time in consultation with Suu Kyi, according to the country’s constitution.

“This case began with authorization from the government at the highest levels, all the way up to the president’s office, and the government can, if it wants to, end it today,” Clooney said.

“Myanmar was a success story a few years ago, and the idea is that releasing these journalists would actually set them back on the right track towards a society that respects the rule of law, a society that’s moving towards becoming a full democracy.” 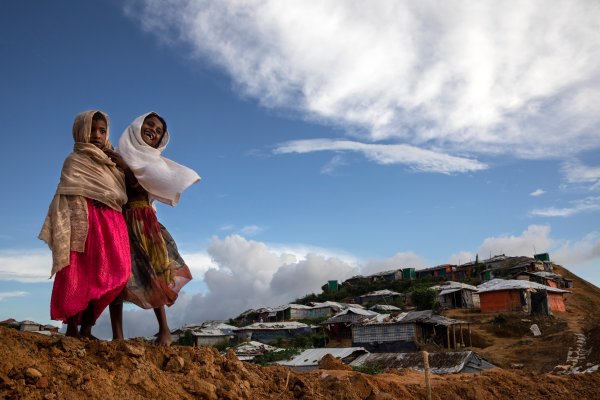 U.N. Preparing Evidence of Alleged Atrocities in Myanmar
Next Up: Editor's Pick