Aretha Franklin Never Saw This Picture of Herself. Here's the Story Behind the Previously Unpublished Portrait

Singer Aretha Franklin, photographed at her Los Angeles home in 1977.
Bruce W. Talamon—Courtesy of TASCHEN
By Olivia B. Waxman

When the Queen of Soul Aretha Franklin died last month at the age of 76, she was called a “diva to the end,” and proved that point by going out in a gold-plated casket.

But that doesn’t mean Franklin didn’t have a down-to-earth side, too — and that’s what’s on display in the photo seen here. It was taken in 1977 but was never published until now.

“She did her own makeup. She did her hair herself; she had pulled it back and put it in a bun,” recalls former TIME contract photographer Bruce W. Talamon, who shot the portrait in the living room of Franklin’s Los Angeles home while on assignment for Soul newspaper. The image is one of the nearly 300 photos from soul music’s glory days featured in his new book Soul. R&B. Funk. Photographs 1972–1982.

Back then, a front-page photo of a star like Franklin was just the kind of picture the editors of Soul hoped could boost sales. “We were a small publication. It was hand to mouth. Money was tight,” Talamon says. “[The paper] needed Aretha on the cover, and Aretha said ‘Absolutely.'”

While divas might usually flanked by an army of support staff, Talamon had an enviable amount of privacy with the Grammy winner. They set up in her living room, with no one else around. And, the photographer recalls, what some might see as the concern of a diva — how she was going to look — expressed itself in serious concern about his thoughts on photographic elements such as lighting and composition.

He remembers pleasant small talk too. “I remember she was trying to make me feel comfortable — asked me where I was from. I told her I grew up here in L.A., we talked about L.A. She was never a diva to me. She was gracious with her time.”

He thinks she played the piano at one point, and while he doesn’t remember what she played for or whether she belted out a tune, getting her to strike the right pose was effortless. “I told her I loved her eyes,” he recalls. “I said, ‘I’d like you to lean into the piano,’ and there it was. I think she’s looking at me in a seductive way — not me — but my camera. She was having a good time. Those eyes, those eyes follow you around the room.” 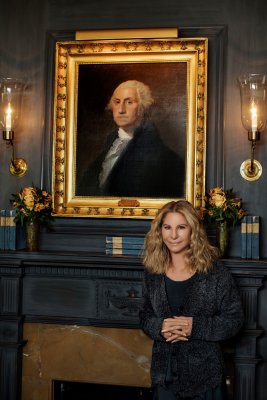 Barbra Streisand Takes a Stand Against Trump on New Song
Next Up: Editor's Pick