Everything You Know About How World War I Ended Is Wrong

U.S. soldiers of the 23rd Infantry, 2nd Division, firing a 37mm machine gun at a German position in the Argonne Forest, during the Meuse-Argonne offensive in 1918.
U.S. Army Signal Corps/The LIFE Picture Collection/Getty Images
Ideas
By Geoffrey Wawro
Geoffrey Wawro is the author of Sons of Freedom: The Forgotten American Soldiers Who Defeated Germany in World War I. He is a professor of history and director of the Military History Center at the University of North Texas. More information can be found at geoffreywawro.com

A hundred years ago today, September 26th, the greatest artillery bombardment in U.S. history—more shells in a few hours than had been fired in the entire American Civil War—fell silent and 350,000 American soldiers got to their feet and began to advance across no-man’s-land toward the German trenches in the Meuse-Argonne. With the French and British stalled in their sectors, the Doughboys aimed to cut the German army’s principal supply line on the Western Front and end World War I.

The American role in the First World War is one of the great stories of the American Century, and yet it has largely vanished from view. Most historians tell us that the U.S. Army arrived too late on the Western Front to affect the war’s outcome, an outcome determined by Allied grit, better tactics, the British blockade of German ports, and, ultimately, German exhaustion and revolution.

It must be baldly stated: Germany would have won World War I had the U.S. Army not intervened in France in 1918. The French and British were barely hanging on in 1918. By year-end 1917, France had lost 3 million men in the war, Britain 2 million. The French army actually mutinied in 1917, half of its demoralized combat divisions refusing to attack the Germans. The British fared little better in 1917, losing 800,000 casualties in the course of a year that climaxed with the notorious three-month assault on the muddy heights of Passchendaele, where 300,000 British infantry fell to gain just two miles of ground.

By 1918, French reserves of military-aged recruits were literally a state secret; there were so few of them still alive. France maintained its 110 divisions in 1918 not by infusing them with new manpower – there was none – but by reducing the number of regiments in a French division from four to three. The British, barely maintaining 62 divisions on the Western Front, planned, in the course of 1918 – had the Americans not appeared – to reduce their divisions to thirty or fewer and essentially to abandon the ground war in Europe.

1918, eventually celebrated as the Allied “Year of Victory,” seemed initially far more promising for the Germans. The French army limped into the year, effectively out of men and in revolt against its officers; British divisions, 25 percent below their normal strength because of the awful casualties of Passchendaele, had not been reinforced. Prime Minister David Lloyd George refused to send replacements to Field Marshal Douglas Haig’s army on the Western Front, so controversial were Haig’s casualties. Lloyd George feared social revolution in Britain if casualties continued to mount, and lamented that Haig “had smothered the army in mud and blood.”

The waning of the French and British in 1917 could not have come at a worse moment, when the Germans had crushed the Russians and Italians and begun deploying 100 fresh divisions to the Western Front for a war-winning offensive in 1918: 3.5 million Germans with absolute artillery superiority against 2.5 million demoralized British and French.

What saved the day? The Americans. The United States declared war on Germany in April 1917, drafted a million-man army (the A.E.F.) in the ensuing months, and deployed it hurriedly to France in the winter of 1917-18. In June 1918, the Germans brushed aside fifty French divisions and plunged as far as the Marne River, just fifty miles from Paris.

Marching up dusty roads past hordes of fleeing French refugees and soldiers—“La guerre est finie!”—the Doughboys and Marines went into action at Château-Thierry and Belleau Wood and stopped the German onslaught on the Marne. With Haig facing defeat in Flanders, actually warning London in April 1918 that the British had their “backs to the wall,” American troops— the manpower equivalent of over 100 French or British divisions—permitted Foch to shift otherwise irreplaceable French troops to the British sector, where a dazed Tommy, sniffing the tang of the sea air over the stink of the battlefield and apprised that Haig had spoken of British backs to the wall, replied, with a glance at the English Channel, “what bloody wall?”

The Americans saved Britain and France in the spring and summer and destroyed the German army in the fall. Most historians argue that the war was won by Marshal Ferdinand Foch’s famous Hundred Days Offensive – a coordinated Anglo-French-American envelopment of the German army on the Western Front – and most emphasize the performance of the British and French and speak of the American battles at Saint-Mihiel and in the Meuse-Argonne as sideshows.

They were anything but. After rousing success in August and September, the British and French offensives had stalled. Haig suffered nearly half a million additional casualties in 1918, and so did the French. They spent their dwindling strength breaching the Hindenburg Line and had little left for the Meuse, Moselle, or Rhine lines, where the Germans would stand fast. Lloyd George’s war cabinet warned Haig that the shrinking army he was conducting slowly eastward was “Britain’s last army,” and it was going fast. As winter approached and the Allies sagged, everything hinged on the pending American thrust northward from Saint-Mihiel and Verdun toward Sedan– aimed at the vital pivot of the whole German position west of the Rhine.

Verdun had always been a thorn in the German side, forcing the German front in France to bend sharply around it—compressing Hindenburg’s vital railways into a narrow space—and offering great opportunities to the Allies, if only they had the manpower, to thrust upward from Verdun to cut the famous four-track railroad line through Sedan and Mézières that conveyed most of the German army’s men, matériel, and supplies.

The American battle in the Meuse-Argonne, from September 26 to November 11, 1918, pierced the most redoubtable section of the Hindenburg Line, reached Sedan on both banks of the Meuse—denying the Germans the river as a defensive shield—and cut the vital four-track railway there, which carried 250 German trains a day. With it, the Germans had moved five divisions every two days to any point on the Western Front; without it, they could barely move a single division in the same span. The American offensive was, a British war correspondent concluded, “the matador’s thrust in the bull-fight.” It cut the German throat.

The Doughboys won the war by trapping the German army in France and Belgium and severing its lifeline. Looking at 1918 in this new way, restoring the enormous impact of the U.S. military to its proper scale and significance, achieves two important things. First, it fundamentally revises the history of the First World War. Second, it brings out the thrilling suspense of 1918, when the fate of the world hung in the balance, and the revivifying power of the Americans saved the Allies, defeated Germany, and established the United States as the greatest of the great powers. 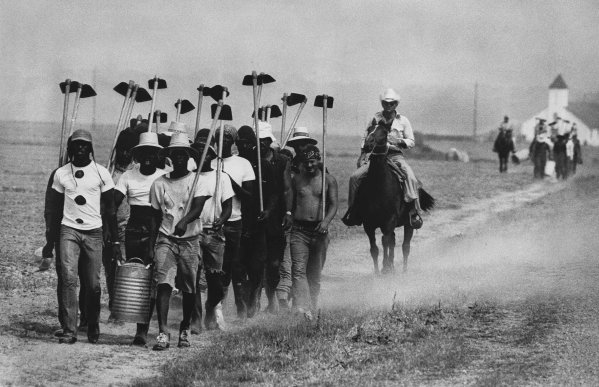 The True History of America's Private Prison Industry
Next Up: Editor's Pick