For years, President Donald Trump made the claim that the United States had become a laughingstock around the world. So it came as a bitter irony Tuesday that the whole world laughed at him during the U.N. General Assembly when he made the audacious claim that his Administration was more accomplished than almost any other in U.S. history.

“I didn’t expect that reaction, but that’s OK,” Trump responded while smiling. But laughter quickly turned to uneasy silence as Trump launched into a 35-minute attack on the very values at the heart of the UN — solidarity, globalization, and respect for international institutions and international law.

“We reject globalism and embrace the doctrine of patriotism,” Trump said in a clear rejection of the half-century old international institutions that emerged from the devastation of World War II. It was a declaration of the supremacy of sovereignty, and the idea that all nations should embrace their own versions of his “America First” foreign policy approach.

From there, Trump’s speech went around the globe reprimanding ungrateful allies, lambasting bad trade deals and criticizing other agreements that enabled the world to take advantage of America. “The U.S. will always choose independence and cooperation over global governance, control and domination,” he said, defending his Administration’s retreat from U.N. organizations like the International Criminal Court, Human Rights Council and a global compact on migration.

It was the type of speech you might expect from a president being advised by John Bolton, former U.S. ambassador to the U.N. under George W. Bush, whose decades-long résumé is defined by a distaste for international institutions and treaties. It was a triumphant return to the U.N. for Bolton, his first since being named Trump’s national security adviser in March.

His imprint on the president’s speech could not be mistaken.

After all, it was Bolton who launched the opening salvo on the U.N. just two weeks earlier when he announced Washington would “use any means necessary” to push back against the International Criminal Court, the body mandated by most of the international community to prosecute genocide, war crimes and crimes against humanity. It was initially intended to act as a “court of last resort,” to step in when nations’ legal systems fail. To Bolton, and now Trump, the court is a challenge to its constitutional authority. “We will never surrender America’s sovereignty to an unelected, unaccountable, global bureaucracy,” Trump said.

In another shake-up from longstanding U.S. policy, and one that appeals to Bolton, Trump said his Administration intends to take a “hard look” at U.S. foreign assistance, particularly to nations that don’t act in U.S. interests. “Moving forward, we are only going to give foreign aid to those who respect us and, frankly, are our friends,” he said. “And we expect other countries to pay their fair share for the cost of their defense.”

Part of this, Trump said, would be paring back on U.S. contributions to the U.N. peacekeeping operations around the globe from today’s 28.5%, or $1.9 billion, to 25%, or $1.7 billion. Here, again, it was hard not to see the influence of Bolton, who has a piggy bank in his office with a U.N. logo emblazoned on the side. “This will encourage other countries to step up, get involved, and also share in this very large burden,” Trump said.

The president made the same claim in reference to Organization of Petroleum Exporting Countries, which he said are “ripping off the rest of the world” through rising oil prices. He apparently targeted some Gulf allies as freeloaders without specifically naming any country in particular. “We defend many of these nations for nothing, and then they take advantage of us by giving us high oil prices,” he said.

From the U.N. dais last year, Trump called North Korean leader Kim Jong Un “little rocket man” in a fiery speech that threatened war. Those tensions have since eased. This year, however, Trump took aim at Iran as his central target following his decision in May to pull the U.S. out of the 2015 Iran nuclear deal and re-impose economy-crippling sanctions. “We ask all nations to isolate Iran’s regime as long as its aggression continues,” Trump said. Yet, in a direct rebuke to that call, five world powers—Britain, France, Germany, Russia, and China—signed an agreement on the U.N. sidelines to set up legal entity to circumvent U.S. sanctions.

Indeed, Western allies have not embraced the message of sovereignty, which has traditionally been pushed by states like Russia, China, Iran and North Korea as a self-defense tactic. U.N. Secretary-General António Guterres, called on the international community to come together to help repair the broken trust. “Our future rests on solidarity,” he said. “We must reinvigorate our multilateral project.”

Trump, meanwhile, believes that international collaboration has resulted in the U.S. being swindled. For decades, he said, the United States opened its economy with few conditions, allowing foreign goods from all over the world to flow freely across U.S. borders. Other countries did not grant that same access.

“We will no longer allow our workers to be victimized, our companies to be cheated and our wealth to be plundered and transferred,” Trump said, detailing his rationale to slap China with another $200 billion in import tariffs with a promise to implement more, should Beijing retaliate. “The United States will not be taken advantage of any longer.” 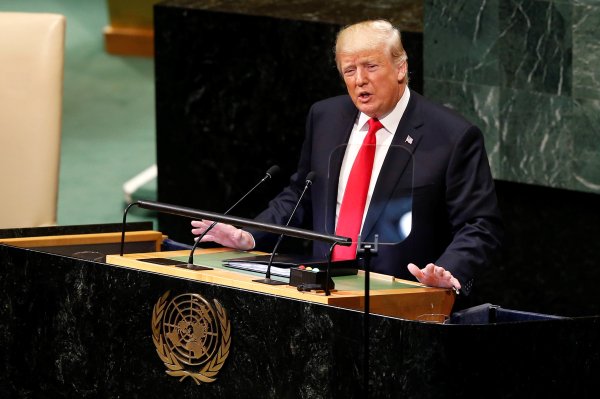 Here Are the Things President Trump Criticized in His United Nations Speech
Next Up: Editor's Pick