The Case For Taking a Walk After You Eat

At the end of a long day, it’s tempting to dive into your social feeds or Netflix queue the minute you’ve finished eating. But back before screens bogarted all our free time, an after-dinner stroll was a popular activity and one associated with improved health and digestion. “Italians have been walking after meals for centuries,” says Loretta DiPietro, a professor of exercise science at George Washington University’s Milken Institute School of Public Health, “so it must be good.”

Research backs this up. One small study co-authored by DiPietro found that when older adults at risk for type-2 diabetes walked on a treadmill for 15 minutes after a meal, they had smaller blood sugar spikes in the hours afterwards. In fact, the researchers found that these short post-meal walks were even more effective at lowering blood sugar after dinner than a single 45-minute walk taken at mid-morning or late in the afternoon.

The human digestive system converts food into the sugar glucose, which is one of the body’s primary energy sources—so after a meal, glucose floods a person’s bloodstream. Hormones like insulin help pull that glucose into cells, either to be used immediately or stored away for later use. But for people with diabetes and impaired insulin activity, too much glucose can remain in the blood, which can cause or contribute to heart disease, stroke, kidney disease and other health problems.

“Insulin secretion in response to a meal tends to wane later in the day, and this is especially so in older people,” DiPietro says. She points out that many of us eat our largest meal of the day in the evening, and we also tend to sit around afterward. As a result, “blood glucose levels will rise very high and will stay elevated for hours,” she says.

What good does walking do? “The muscles we use to walk use glucose as energy, drawing it out of circulation and therefore reducing how much is floating around,” says Andrew Reynolds, a postdoctoral research fellow at the University of Otago in New Zealand.

Reynolds coauthored a 2016 study of people with type-2 diabetes and found that just 10 minutes of walking after a meal helped control their blood sugar levels. “We saw the biggest differences with walking after dinner time,” compared to other times of the day, Reynolds says. Like DiPietro, he says many people just sit around in the evenings, and this may be especially bad because the body’s ability to manage blood sugar at that time of day is weakest. “Getting up and moving around at that time was very effective,” he says.

Along with combatting surges in blood sugar, a little post-meal movement may also aid digestion. “Exercise stimulates peristalsis, which is the process of moving digested food through the GI tract,” says Sheri Colberg-Ochs, a diabetes and exercise researcher at Old Dominion University. Her research has found that a post-meal walk is much more effective than a pre-meal walk for controlling blood sugar.

More research has found that walking helps speed up the time it takes food to move from the stomach into the small intestines. This could help improve satiety after eating. There’s also evidence that links this type of faster digestion with lower rates of heartburn and other reflux symptoms.

Walking isn’t the only type of post-meal exercise that provides these benefits. “Whether it is resistance exercise or aerobic exercise, both have a similar impact on lowering blood glucose levels,” says Jill Kanaley, a professor of nutrition and exercise physiology at the University of Missouri. One small study by Kanaley and others found that for people with obesity and type-2 diabetes, doing a weight training session with leg presses, calf raises, chest flies and back extensions 45 minutes after dinner lowered their triglycerides and blood sugar for a short time—and improved their wellbeing.

But more isn’t necessarily better when it comes to post-eating exercise. There’s some evidence that vigorous forms of training may delay digestion after a meal. “Exercising muscles pull more of the blood flow their way during activity, and the GI tract gets relatively less,” Colberg-Ochs says. “That actually slows down the digestion of food in your stomach during the activity.” Most of the research on post-meal physical activity suggests that moderate intensities—think fast walking or biking—are best. “Anything but really intense exercise would probably work equally well,” she adds.

As far as timing goes, try to move your body within an hour of eating—and the sooner the better. Colberg-Ochs says glucose tends to peak 72 minutes after food intake, so you’d want to get moving well before then.

Even if you can only fit in a quick 10-minute walk, it’ll be worth it. Apart from the perks mentioned here, more research has linked short bouts of walking with benefits like lower blood pressure and a reduced risk for depression.

So make like the Italians and head out for a walk after your next meal. Your TV and the Internet will still be there when you get home. 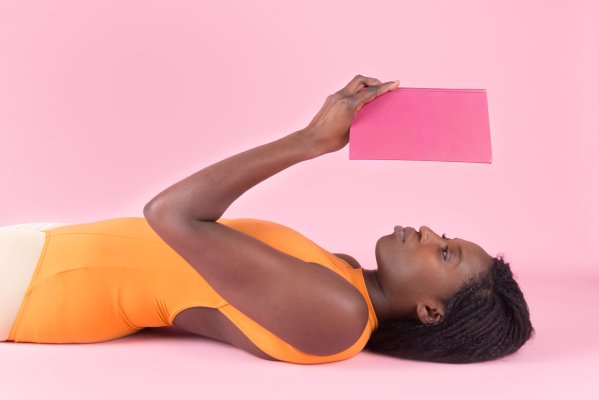 Does Thinking Burn Calories? Here's What the Science Says
Next Up: Editor's Pick