When Kelly Thomas got the phone call that would change her life, she almost hung up. “I thought it was a sales call or something,” Thomas remembers.

But on the line was a researcher from the Kentucky Spinal Cord Injury Research Center at the University of Louisville, offering Thomas a place in a trial — one that eventually allowed the 23-year-old Florida native, who became paralyzed after a 2014 car accident, to walk again.

The results of the study, which were published Monday in the New England Journal of Medicine, are striking. Of four partially paralyzed people who went through extensive mobility training, two — Thomas, and 35-year-old Jeff Marquis — eventually regained the ability to walk with help from a spinal stimulator, potentially opening the door to new therapies for people with traumatic spinal cord injuries resulting in paralysis.

“Even for people with chronic injury, there is this capacity for significant incremental recovery that can impact their daily life, their quality of life and their function,” says Susan Harkema, associate scientific director of the Spinal Cord Injury Research Center and one of the paper’s authors. “The spinal cord can relearn to walk again.”

For Thomas and Marquis, that breakthrough was a long time coming. Thomas, a horseback rider and soccer player before her accident, had been confined to a wheelchair for three years. Marquis, who broke his neck and became paralyzed after a mountain biking accident seven years ago, was forced to quit his job as a chef and needed assistance for everyday tasks like getting out of bed. For both of them, learning to walk meant starting over from scratch.

“It’s something that used to be automatic. I never really thought, ‘I’ve got to straighten this leg, and I’ve got to lift up the other leg,'” Marquis says. “Putting it all together, it takes as much mental endurance as it does physical.”

Mental focus was integral to both patients’ success, Harkema says. The technique her lab developed integrated three crucial parts: stimulation via electrodes implanted on the spinal column, physical assistance from trainers and mental intention from the individuals. Only when all three came together, she says, did the patients see results.

Contrary to conventional medical wisdom, Harkema says many neurons remain alive and active after a spinal injury, even if they can no longer process and translate information from the brain and the surrounding environment, thus impairing movement. In the new study, Harkema and her team demonstrated that it’s possible, in some cases, to retrain those existing circuits.

First, they implanted electrodes on the spine to generate electrical currents meant to tap into maladapted circuitry and “get the spinal cord in the right state so it can function more like it used to,” Harkema says. (A separate stimulator was also implanted surgically in their abdominal wall.) Then, a team of trainers physically moved the patients’ bodies to help them remember what standing and stepping feels like. Meanwhile, the individuals focused on moving, providing the mental intention to walk.

If those three things happened perfectly in concert, Harkema says, the circuitry took over, and the individual was able to walk without assistance.

Getting there wasn’t easy. Marquis was the first trial participant to take steps with both legs by himself, but doing so took 85 weeks of training. When the day came, however, he knew it was time.

“It was going pretty well, and I asked [the trainer] working on my left leg to let me take a couple steps without him helping, and it actually did work, to everybody’s surprise,” Marquis says. “I was scared to try that hard and have it not work. But it felt good and I was like, ‘Alright, let’s do this.'”

Thomas, meanwhile, says she was in “complete shock” when, after 15 weeks of trying, she finally took her first steps. (Thomas began her training after Marquis, and her initial injury was less severe.)

Today, both are able to walk using walkers or canes and report better overall health and quality of life, thanks to the spinal stimulator. And while the other two patients in the trial did not achieve independent walking, both regained stability in their torsos and the ability to stand, which are also encouraging results, says Claudia Angeli, another of the paper’s authors and an assistant professor at the Spinal Cord Injury Research Center.

“The ability to walk, the ability to stand, the ability to voluntarily move the legs: It’s there, and it can be recovered with the perfect combination of, in this case, epidural stimulation and intent from the brain,” Angeli says. “The spinal cord is telling us that it’s able to recover those functions.”

The new research will need to be replicated in a larger number of patients to verify the results and determine exactly which injuries this type of therapy can treat. But the findings add to other promising results in the field. In 2014, researchers at the University of Louisville, including Harkema and Angeli, used epidural stimulation to help four paralyzed individuals regain movement of their legs. And on Monday, the same day the new Louisville study was published, researchers from the University of California Los Angeles and the Mayo Clinic reported in Nature Medicine that they helped a paralyzed man walk with assistance.

“Just the understanding that this capacity is there should change the conversation about providing therapy and providing the right type of physical rehabilitation for people with these types of injuries,” Harkema says. “These discussions need to now be open, to be had, because there’s evidence for these mechanisms.” 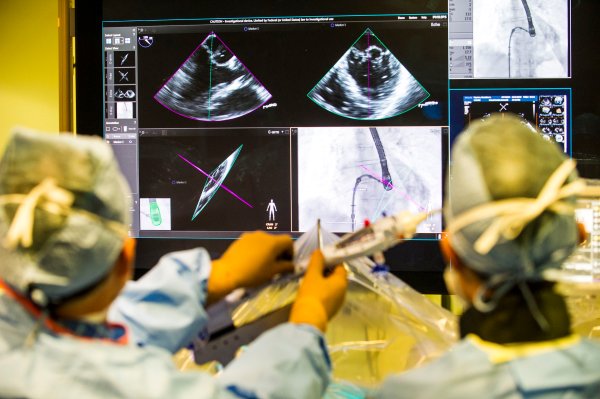 This Medical Clip May Be a Powerful Treatment for Heart Failure, Study Says
Next Up: Editor's Pick