Inmates at Louisiana State Prison in Angola, La., march down a dusty trail on May 30, 1977, en route to working in the fields.
Times-Picayune/Steel/AP
By Shane Bauer

Before founding the Corrections Corporation of America, a $1.8 billion private prison corporation now known as CoreCivic, Terrell Don Hutto ran a cotton plantation the size of Manhattan. There, mostly black convicts were forced to pick cotton from dawn to dusk for no pay. It was 1967 and the Beatles’ “All you need is love” was a hit, but the men in the fields sang songs with lyrics like “Old Master don’t you whip me, I’ll give you half a dollar.” Hutto’s family lived on the plantation and even had a “house boy,” an unpaid convict who served them.

At the time, most prisons in the South were plantations. In some states, certain inmates were given guns and even whips, and empowered to torture those who didn’t meet labor quotas. Hutto did such a good job in Texas that Arkansas would hire him to run their entire prison system–made entirely of plantations–which he would run at a profit to the state. His ability to run a prison that put money into state coffers would later attract the attention of two businessmen with a new idea: to found a corporation that would run prisons and sell shares on the stock market.

Prisons had been privatized before. Louisiana first privatized its penitentiary in 1844, just nine years after it opened. The company, McHatton, Pratt, and Ward ran it as a factory, using inmates to produce cheap clothes for enslaved people. One prisoner wrote in his memoir that, as soon as the prison was privatized, his jailers “laid aside all objects of reformation and re-instated the most cruel tyranny, to eke out the dollar and cents of human misery.” Much like CoreCivic’s shareholder reports today, Louisiana’s annual penitentiary reports from the time give no information about prison violence, rehabilitation efforts, or anything about security. Instead, they deal almost exclusively with the profitability of the prison.

Like private prisons today, profit rather than rehabilitation was the guiding principle of early penitentiaries throughout the South. “If a profit of several thousand dollars can be made on the labor of twenty slaves,” posited the Telegraph and Texas Register in the mid-19th century, “why may not a similar profit be made on the labor of twenty convicts?” The head of a Texas jail suggested the state open a penitentiary as an instrument of Southern industrialization, allowing the state to push against the “over-grown monopolies” of the North. Five years after Texas opened its first penitentiary, it was the state’s largest factory. It quickly became the main Southern supplier of textiles west of the Mississippi.

Prison privatization accelerated after the Civil War. The reason for turning penitentiaries over to companies was similar to states’ justifications for using private prisons today: prison populations were soaring, and they couldn’t afford to run their penitentiaries themselves. The 13th amendment had abolished slavery “except as punishment for a crime” so, until the early 20th century, Southern prisoners were kept on private plantations and on company-run labor camps where they laid railroad tracks, built levees, and mined coal. Former slaveholders built empires that were bigger than those of most slave owners before the war. Nathan Bedford Forrest, first Grand Wizard of the Ku Klux Klan, controlled all convicts in Mississippi for a period. US Steel, the world’s first billion-dollar company, forced thousands of prisoners to slave in its coal mines. Lessees went to extreme lengths to extract profits. In 1871, Tennessee lessee Thomas O’Conner forced convicts to work in mines and went as far as collecting their urine to sell to local tanneries. When they died from exhaustion or disease, he sold their bodies to the Medical School at Nashville for students to practice on.

Companies liked using convicts in part because, unlike free workers, they could be driven by torture. One common form of punishment was “watering” in which a prisoner was strapped down, a funnel forced into his mouth, and water poured in so as to distend the stomach to such a degree that it put pressure on the heart, making the prisoner feel that he was going to die. Another punishment was “stringing up” in which a cord was wrapped around the men’s thumbs, flung over a tree limb, and tightened until the men hung suspended, sometimes for hours. Whipping was common. An Alabama government inspection showed that in a two-week period in 1889, 165 prisoners were flogged. Arkansas didn’t ban the lash until 1967.

Lessees gave a cut of the profits to the states, ensuring that the system would endure. Between 1880 and 1904, Alabama’s profits from leasing state convicts made up 10 percent of the state’s budget. By 1886 the US commissioner of labor reported that, where leasing was practiced, the average revenues were nearly four times the cost of running prisons. Writer George Washington Cable, in an 1885 analysis of convict leasing, wrote the system “springs primarily from the idea that the possession of a convict’s person is an opportunity for the State to make money; that the amount to be made is whatever can be wrung from him…and that, without regard to moral or mortal consequences, the penitentiary whose annual report shows the largest case balance paid into the State’s treasury is the best penitentiary.”

This maniacal drive for profits managed to create a system that was more deadly than slavery. Between 1870 and 1901, some three thousand Louisiana convicts, most of whom were black, died under the lease of a man named Samuel Lawrence James. Before the Civil War, only a handful of planters owned more than a thousand convicts, and there is no record of anyone allowing three thousand valuable human chattel to die. Throughout the South, annual convict death rates ranged from 16 percent to 25 percent, a mortality rate that would rival the Soviet gulags to come. There was simply no incentive for lessees to avoid working people to death. In 1883, one Southern man told the National Conference of Charities and Correction: “Before the war, we owned the negroes. If a man had a good negro, he could afford to take care of him: if he was sick get a doctor…But these convicts: we don’t own ‘em. One dies, get another.”

States became jealous of the profits private companies were making, so in the early 20th century, they bought plantations of their own and eventually stopped leasing to private companies. Ten years after abolishing convict leasing, Mississippi was making $600,000 ($14.7 million in 2018 dollars) from prison labor. It was in this world that a man named Terrell Don Hutto would learn how to run a prison as a business.

CoreCivic prisons aren’t nearly as brutal labor camps under convict leasing or the early 20th century state-run plantations, but they still go to grotesque lengths to make a dollar. I saw this first hand when, in 2014, I went undercover as a prison guard in a CoreCivic prison in Louisiana. There, I met a man who lost his legs to gangrene after begging for months for medical care. CoreCivic was often resistant to sending prisoners to the hospital: their contract required that outside medical visits be funded by the company. Educational programs were axed to save money. To keep costs low, guards were paid $9 an hour and oftentimes there were no more than 24 on duty, armed with nothing but radios, to run a prison of more than 1,500 inmates. The prison was incredibly violent as a result. In a four-month period in 2015, the company reported finding some 200 weapons, 23 times more than the state’s maximum security prison. I knew one inmate who committed suicide after repeatedly going on hunger strike to demand mental health services in a prison with only one part-time psychologist. When he died, he weighed 71 pounds.

Private prisons, according to a 2016 Department of Justice Study, are consistently more violent that their already-dismal public counterparts. Yet while we went through training to become guards, we were taught that, if we saw inmates stab each other, we were not to intervene. “We are not going to pay you that much,” our instructor told us. Our job was simply to shout the words “stop fighting,” thus protecting the company’s liability and avoiding any potentially costly harm to ourselves. Our job, after all, was to “deliver value to our shareholders.” “If them fools want to cut each other,” the instructor said, “well, happy cutting.”

In May 2017, I bought a single share in the company in order to attend their annual shareholder meeting. As I sat and watched Terrell Don Hutto and other corporate executives discuss how their company’s objective was to “serve the public good,” I wondered how many times such meetings had been held throughout American history. How many times had men, be they private prison executives or convict lessees, gotten together to perform this ritual? They sit in company headquarters or legislative offices, far from their prisons or labor camps, and craft stories that soothe their consciences. They convince themselves, with remarkable ease, that they are in the business of punishment because it makes the world better, not because it makes them rich.

Adapted from AMERICAN PRISON: A Reporter’s Undercover Journey into the Business of Punishment by Shane Bauer. Published by arrangement with Penguin Press, a member of Penguin Random House, LLC. Copyright © 2018 by Shane Bauer. 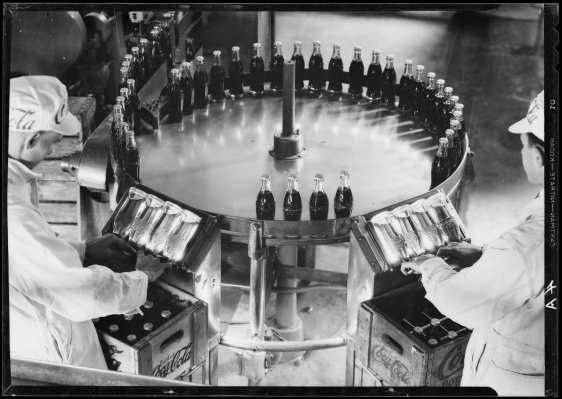 How a Lawsuit Against Coca-Cola Convinced Americans to Love Caffeine
Next Up: Editor's Pick