More than 500 Sexual Assaults Happen in a Single Year at Some Military Installations: Report

A newly released Pentagon study revealed that many sexual assaults in the U.S. military occur across the globe at a relatively small number of bases and naval ships, including some installations where more than 500 incidents occurred in a single year.

The 119-page study, conducted by Rand Corporation, surveyed American service members to uncover where troops were most at risk of sexual assault and harassment. In many cases, installations with large populations of younger, single, and more-junior-ranking service members had a greater probability of these incidents occurring.

“Each service member’s estimated risk of being sexually assaulted in the next year depends, to a surprising extent, on his or her duty assignment to a particular unit, command, and installation,” the study said.

Assaults most often occurred on training bases in the Army and Marine Corps. Both of the services were found to have installations where Rand estimated that in fiscal year 2014 there were more than 500 sexual assaults of men and women: Fort Hood, Fort Bragg, Fort Lewis, Fort Campbell, Fort Bliss, and Camp Lejeune.

The study found that sexual assault risk for women in the Air Force was lower than the average for women in other services, but the top three bases where it did most often occur were all focused on undergraduate pilot training.

Military installations in the Washington, D.C.-region, such as the Pentagon, were reportedly the safest places to work across all the branches.

The Pentagon commissioned the study, entitled Estimates for Installation- and Command-Level Risk of Sexual Assault and Sexual Harassment, with the aim of identifying risk factors and locations where sexual misconduct most often occurs. The Defense Department has spent years launching various initiatives aimed at combating rape and sexual assault within U.S. military services without reporting significant progress.

“By targeting prevention, training, and other interventions at the largest and highest-risk installations, the services might efficiently make important reductions in their sexual assault rates,” the study said.

The findings, which are now four years old, did not provide direct information about where the assaults occurred. “They may have occurred in the local community, in off-base housing, during off-base training exercises, or on the installation,” the study said. “For example, when referring to rates of sexual assault for personnel assigned to the USS George Washington, we do not infer that all such assaults occurred while sailors were on that ship.”

The study is the latest document to detail the U.S. military’s long-running sexual assault problems. In April, an Pentagon’s annual report stated the number of alleged assaults spiked across all four military branches. The highest increase came from the Marines, which remains embroiled in a scandal in which nude photographs of female Marines were posted online without their knowledge.

A total of 6,769 men and women reported assaults in the year that ended Sept. 30, up from 6,172 a year earlier. The reports came in from uniformed service members and civilian workers. It was the highest number of reported assaults since at least 2006, the last year the Pentagon has available on the data. 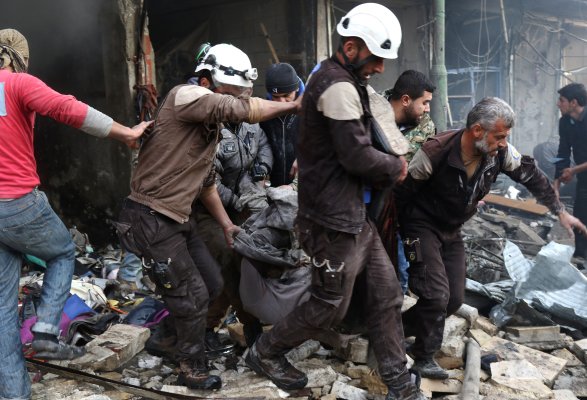 Trump Adviser Threatens Syria If It Uses Chemical Weapons
Next Up: Editor's Pick