It’s about as close to a real-life experience of getting Punk’d as possible: L.A., California teen Leo Marenghi was knocked over by Ashton Kutcher‘s car—but ended up getting a photo and a good story out of the close encounter with the actor and entrepreneur.

Marenghi, who was babysitting for a family friend, was on his way to pick up the kids from school on Tuesday afternoon at around 3 p.m. while riding a Razor scooter when he found himself very suddenly on the ground.

“I got up, and he was getting out of the car at the same time,” Marenghi explained; the driveway that the car had exited has limited visibility.

Marenghi continued: “And I looked up and realized it was him. I was like, ‘Yeah I’m fine, are you Ashton Kutcher though?’ He was like, ‘Yeah, but are you OK?” Marenghi grew up watching Kutcher in shows like That 70’s Show, so the recognition was instant.

Luckily, Marenghi was alright—just sore—and so was Kutcher’s car, a black Tesla. To commemorate the moment, Marenghi had a nearby security guard snap a photo of the pair before he headed out to pick up the kids as usual, and Kutcher continued on his way.

“I called my mom and my sister, but they didn’t believe me. Good thing I have that picture,” he told TIME. While this was his first car accident, and hopefully his last, he still considers it “definitely the best” celebrity encounter he’s ever had. “I’m so glad I was OK, because it changes the whole experience from something that could have been bad to a really cool experience.” 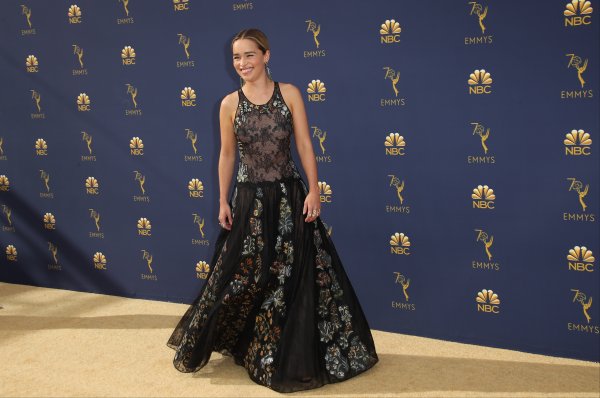 Emilia Clarke Showed Her Undying Love for Game of Thrones With the Mother of All Dragon Tattoos
Next Up: Editor's Pick