The Supreme Court Nomination Process Has Become a Disgrace

How low we have sunk. The Democrats have demanded an FBI investigation into an alleged drunken sexual assault from 36 years ago, between teenagers, at a party in a private home. The accuser doesn’t remember exactly when the offense took place or exactly how she got to the house. And she only allowed her name to be publicly associated with the accusation after the completion of a two-month-long investigation into its subject, Judge Brett Kavanaugh, by the U.S. Senate Judiciary Committee and two days of questioning by 18 Senators—and several prior investigations, including six by the FBI and two by the American Bar Association, during Kavanaugh’s ascension to the U.S. Court of Appeals for the D.C. Circuit. And so Kavanaugh, who has an impeccable record as a public servant, a history of sensitivity to women’s rights and the endorsement of scores of women who said he invariably treated them with respect and decency, is facing the threat that his appointment will be derailed at the eleventh hour.

Our Justices and our Supreme Court, whether or not we agree with individual decisions, are respected above all of our government institutions and are the envy of the world. I have practiced law before some of this nation’s highest courts for over 50 years, including 63 arguments before 20 different Justices of the Supreme Court, appointed by 11 different presidents. That is one fifth of all Justices ever appointed to the Court by one fourth of our presidents — Democrat and Republican. I have won and lost my share of arguments in decisions. But every case was heard with respect, understanding and great care.

In our history, most of America’s distinguished Justices were appointed in a process marked by dignity and decorum. Justices John Paul Stevens, Sandra Day O’Connor, Antonin Scalia and Anthony Kennedy were confirmed by unanimous Senate votes. Justice Ruth Bader Ginsburg’s confirmation was opposed by only three Senators.

But while the nominees from Presidents Bush, Obama and Trump have been outstanding individuals with impeccable credentials, today’s confirmation proceedings are characterized by acrimony, political grandstanding, nasty charges, protests, mischaracterizations and quite possibly defamatory innuendo. Nominees must answer invasive questions about their jobs, speeches, meetings, personal relationships, movie rental history and debts from buying baseball tickets with friends—as well as their views on subjects that may come before the court, which they could not possibly answer without, in Justice Ginsburg’s words, displaying “disdain for the entire judicial process.” We expect them to serve for life on our highest court and render scores of decisions every year on matters of immense importance to all of us. Yet we make them submit to the most destructive, indecent and undisciplined political process that our nation has ever spawned.

It is surprising that anyone of the character, integrity and standing required of our highest court would allow their names to be submitted for such deplorable treatment. But it seems that the Senators in charge of these proceedings seem to enjoy the images they are projecting. If so, the process will not improve no matter who is President or who controls the Senate. And worthy nominees will suffer.

Olson, a Partner at Gibson, Dunn & Crutcher, has argued 63 cases before the U.S. Supreme Court; he testified on behalf of Judge Kavanaugh on Sept. 7. 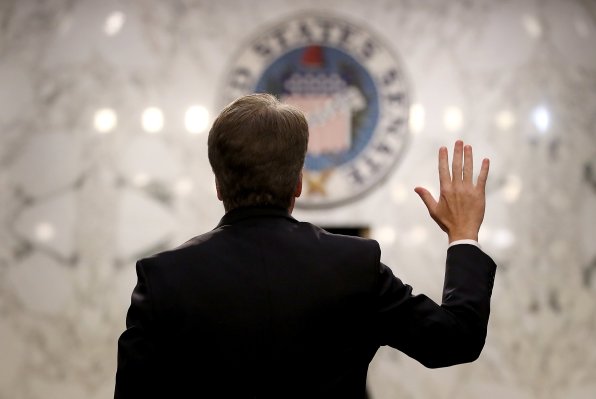 Kavanaugh’s Confirmation Fight Is the Ultimate Test of Political Power in 2018
Next Up: Editor's Pick