A Hong Kong court on Wednesday sentenced a Malaysian professor and anesthesiologist to life in prison for killing his wife and daughter using two yoga balls filled with carbon monoxide, a murder the court said was “premeditated and calculated,” the South China Morning Post reports.

Khaw Kim Sun, a 53-year-old professor at the Chinese University of Hong Kong, was unanimously found guilty of killing his wife, Wong Siew Fing, 47, and their second child, Lily Khaw Li Ling, 16, in May 2015. Khaw had pleaded not guilty.

“It is shocking that a highly educated and successful man would conjure up such a calculated method to get rid of his wife,” said Justice Judianna Barnes Wai-ling.

Three years ago, a jogger found the wife unresponsive in her yellow Mini-Cooper with her daughter after Khaw had placed leaking carbon-monoxide-filled inflatable balls in the trunk. The two were rushed to the hospital, where they were declared dead. A post-mortem found lethal amounts of carbon monoxide in their blood.

Read more: Hong Kong Doctor Is Accused of Killing His Wife and Daughter With a Gas-Filled Yoga Ball. Here’s What to Know About the Case

In a trial lasting 21 days, prosecutors portrayed the deaths as a premeditated murder executed amid a souring relationship with his wife and an alleged affair with a student. Khaw was supposed to inherit his wife’s share of several properties jointly-held by the couple. It is unclear whether Khaw will appeal the decision.

Several grisly murders have taken place in recent years in the semiautonomous region of China, a densely populated financial hub. In August, a professor at the University of Hong Kong was charged with murder after his wife’s body was discovered inside a suitcase. In 2016, British banker Rurik Jutting was convicted of murdering two Indonesian women, one of whom was also stuffed into a suitcase. 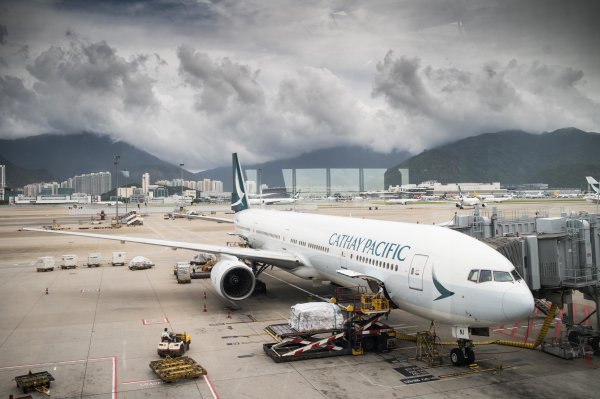 Cathay Pacific Misspells Its Own Name on the Side of a Plane
Next Up: Editor's Pick