French alt-pop artist Héloïse Letissier goes by many names. Her newest one, Chris, is also the title of her new album, out Sept. 21.

“Chris is about me pulling you a bit closer to me. Pay attention: I have something to tell you,” she tells TIME. “I wanted to make a record about being a female who wanted, and who lusted after: a really active figure, and a complex one.”

As the frontwoman of the experimental pop identity Christine and the Queens, Letissier first appeared in a big way with the release of Chaleur Humaine in France in 2014; she nearly swept the French version of the Grammys and performed with Madonna, while “Tilted,” a French hit she later translated into an English version, became one of TIME’s favorites in 2015. Now, she continues to explore—and explode—preconceptions of gender and performance. She is not your typical pop star, as she’ll be the first to note. Her embrace of androgyny and queerness finds new expressions in the persona she has honed for Chris, with hair shorn short, choreography in which she embodies masculinity on her own terms and songs that swing nimbly from desire to despair through synth-pop that feels both retro and forward-thinking.

TIME caught up with Letissier to talk about the way she approaches her art, how a certain Leonardo DiCaprio movie character inspired her swagger and her wariness about becoming just a trend.

TIME: How is this new album a departure from your previous work? What has brought you to this place putting out this new body of work?

LETISSIER: Well, it’s a photograph of where I am. I was just out of the tour of the first album; I toured for like two and a half years. It took me to places I never thought I’d go. I was on stage every night, and my body was getting more precise, stronger than I thought it would be. My voice was getting more muscular and warm. As a woman, I was getting older, going through this process; choosing to be Christine and the Queens was part of me trying to emancipate, and the end of shame and fear in my life. I was empowered in my writing and my stagecraft, and it started to resonate in my life also.

So when I started to write Chris, the second album, I was a bit more empowered, I was a bit more experienced in stories of desire, which made the record a bit more defiant. There’s an exhilaration in the second round. It’s so much about feeling—having all the feels. Even if you’re sometimes sad or frustrated, there’s a joy in expressing those feelings and addressing complexity.

I love Christine, and I am Chris. I don’t think of it as a construction; I see it as a theatricality, but it’s also a way for me to be more honest. It’s actually way more raw and honest than sometimes who I am when I go out regularly. The nickname is a way to address the idea that I’m getting a bit more comfortable, and I’m apologizing even less. I can address everything with more strength. It can include the fact that I’m happy and also extremely vulnerable and sometimes extremely powerful. There’s also a costume element to it. It’s based on male characters in movies, like Leonardo DiCaprio in Romeo + Juliet, the figure of the young free man who can just, like, walk around in a Hawaiian shirt out in the streets and you can call his name in streets: “Chris!” I don’t have much time, so the length is shorter, the hair is shorter.

Were there any other characters or musicians or idols you were thinking about?

It was quite cinematic this time around. I was interested in revisiting masculine tropes, figures of heroes. In the “5 Dollars” video, I was exploring the scenes of creation of characters in American movies like American Gigolo or American Psycho: the construction of a hero, an ambivalent one. The video for “Girlfriend” explored a West Side Story theme, almost a theatrical, inoffensive version, flexing the muscle while actually being a woman. I wanted to twist those figures to my size and my gender, because I was interested in exposing the theatricality of it, actually. For me, the masculine experience is theater.

Earlier this summer, you did a small showcase in New York, and I found the choreography to be so specific and surprising. How important is the physical aspect to the work you create?

The dancing has been a part of the character since I decided on Christine. With every album, there’s also a set of rules that comes with the dancing. On the first album, I was working the dance differently than now. Even when I write, I have an idea of how I want to perform it.

I have a track called “Doesn’t Matter,” and when I wrote it I was like, “It has to be a duet with a male dancer. It has to be this way.” This explosion of contradictory feelings with a man. And a bit more contemporary; a less classic pop routine. It’s just a different, clever way to tell the story because you don’t have to put words on it. Even if you don’t get what I’m saying, when you see me dancing, you get more of an idea.

You sing in both English and French. How does being a bilingual artist work?

I think it helps me. The translation is like a crash test of what I want to say. When I start in French I have a set of strong images, and when I translate them back to English, my English writing gets weirdly metaphorical. I think with every language, you have a set of strengths and weaknesses. Every language has a reality also. It’s kind of a cool way to tell the same story twice. A cool mind trick.

Do you write in French first often, or does it depend on the song?

On that record I wrote mostly in French, because I was working on a more uptempo, more American-infused sound; to me, the references were American. It was not a French aesthetic, so I was like, if I speak in French on top of it, it will be quite interesting. It shaped a kind of weird relationship between the text and the music that I liked.

Who do you write for?

Do you find you have a different reception between your U.S. and European audiences?

Has the reception to your identity and how you present yourself changed in the last few years, do you think? 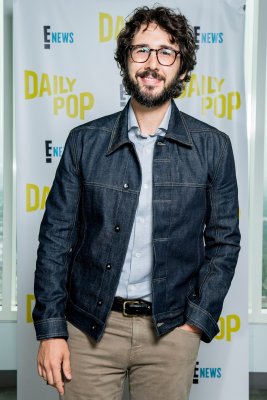 Josh Groban Says Creating New Album Was Like ‘Exorcising a Demon’
Next Up: Editor's Pick