Jan Svendsen (L) and Glenn Weiss pose with the Outstanding Directing For A Variety Special award for 'The Oscars' in the press room on September 17, 2018 in Los Angeles, California.
Dan MacMedan—Getty Images
By Raisa Bruner

Oscars director Glenn Weiss and his new fiancée Jan Friedlander Svendsen were the highlight of Monday night’s Emmy Awards when Weiss proposed onstage just after winning his own Emmy.

The sweet proposal — and Svendsen’s shocked acceptance — captured the heart of all audiences.

Luckily, Jimmy Kimmel was able to track the newly-engaged couple down to get the back story.

“Glenn, no offense, but I never guessed that the Emmy winner I’d be most interested in talking to after the show would be you,” he joked as a shot showed Weiss and Svendsen enjoying champagne in bed together.

As it turns out, Weiss’s win was lucky for the couple’s future as an official pair. “I didn’t think it would happen this quickly, but an opportunity arose,” Weiss told Kimmel. That opportunity, of course, was his Emmys nod. “I don’t think I was targeting Sept. 17 as a date to do this. But it could have been October, or November, or the next two to three years.” At least he came prepared with the ring in his pocket.

As for Svendsen? “As evidenced by my reaction, I had no idea at all,” she said.

But Kimmel wanted to know about the logistics. After all, as a director of awards shows just like that one, Weiss knows how speeches can get cut off.

“I was actually really worried,” he admitted. “I’ve been in the seat and I know how those shows function.” Luckily the powers that be at the Emmys didn’t play him off — and the blissful couple can enjoy their awards-worthy engagement story forever. 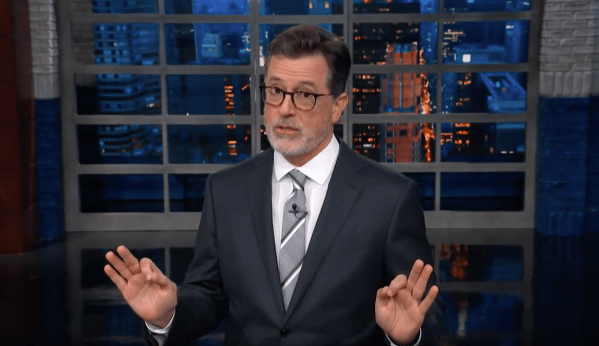 'In No Way True.' Stephen Colbert Goes Off on Trump's 'Sickening' Hurricane Maria Comment
Next Up: Editor's Pick