Authorities say that a California couple charged with drugging and sexually assaulting at least two women may have “worked in tandem” to prey on what could be hundreds of victims.

Grant William Robicheaux, an orthopedic surgeon who appeared on an episode of the Bravo show Online Dating Rituals of the American Male, and Cerissa Laura Riley, who has worked as a substitute teacher, were charged with drugging and assaulting at least two women, the Orange County District Attorney’s office announced Tuesday. The couple apparently worked together to lure victims back to Robicheaux’s apartment using drugs and alcohol, Orange County District Attorney Tony Rackauckas said at a news conference Tuesday.

“We believe the defendants used their good looks and charm to lower the inhibitions of their potential prey,” Rackauckas said.

The couple’s attorneys, Philip Cohen and Scott Borthwick, denied the allegations in a joint statement provided to TIME.

“All allegations of non-consensual sex are unequivocally denied by Grant Robicheaux and his girlfriend Cerissa Riley. They have been aware of these accusations for a number of months, and each of them will formally deny the truth of these allegations at their first opportunity in court,” the statement reads. “Dr. Robicheaux and Ms. Riley believe that such allegations do a disservice to, and dangerously undermine, the true victims of sexual assault, and they are eager to have the proper spotlight shed on this case in a public trial. It must be noted that none of the allegations in this matter relate to or concern Dr. Robicheaux’s medical practice or patients in any way. They both thank their families and friends for their continued support.”

In April 2016, the couple allegedly invited a woman to a boat party in Newport Beach, where they are accused of drugging her before taking her back to Robicheaux’s apartment and raping her, according to the district attorney’s office. After the woman alerted authorities the next day, multiple drugs were found in her system.

Later that year, Robicheaux, and Riley allegedly drank alcohol at a Newport Beach bar with another woman until the point of her unconsciousness, then assaulted her at Robicheaux’s apartment, authorities said. The woman said she woke up during the assault and screamed for help, at which point a neighbor called the police.

Authorities also said at the news conference that “hundreds” of videos and photos on Robicheaux’s phone appear to show highly intoxicated women who may have been targeted by the pair. “Based on this evidence, we believe that there might be many unidentified victims out there,” Rackauckas said. Robicheaux’s patients do not appear to be among them, although the investigation remains active.

The district attorney’s office said the couple was in possession of drugs including cocaine, MDMA and GHB, which is known as a date-rape drug.

The couple is set to be arraigned on Oct. 24. Robicheaux could face up to 40 years in prison, while Riley could face a sentence of up to 30 years and eight months. 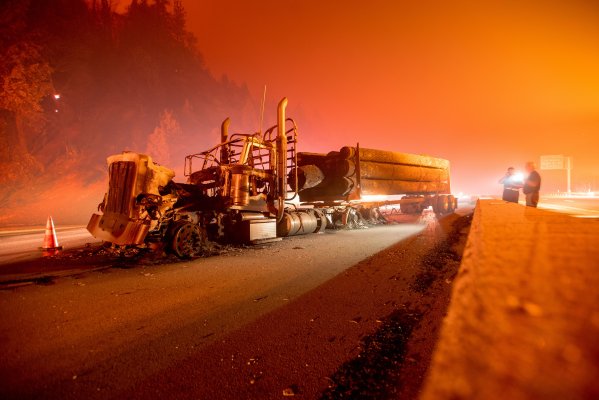 Map: California's Delta Fire Shuts Down 50 miles of I-5
Next Up: Editor's Pick