Delegates hold signs that say "Make America Safe Again", the new GOP slogan, during the 2016 Republican National Convention in Cleveland, Ohio, on July 18, 2016.
Samuel Corum—Anadolu Agency/Getty Images
Ideas
By Jose Antonio Vargas
Vargas, a Pulitzer Prize–winning journalist and the founder of Define American, is the author most recently of the book Dear America: Notes of an Undocumented Citizen.

I was not at all prepared when the producers of The Kelly File on Fox News Channel added a guest to the lineup of an interview I was scheduled to do. This was during the Republican National Convention in Cleveland in 2016. Originally, I thought the interview was supposed to be between Megyn Kelly and me. But before I went on air, I was told that two other guests were added, one of them Laura Wilkerson, whose son, Josh, was killed by an undocumented immigrant. Producers sat us next to each other during the live hit.

“Let me start with you, Laura,” said Kelly as I sat uncomfortably in my chair, knitting my eyebrows. As a group of people, Kelly calls us “illegals” or “illegal immigrants.” In person, to my face, she always refers to me as undocumented.

“You want a harder stance on illegal immigration,” Kelly continued. “And you’re sitting next to Jose, who is himself an admitted undocumented immigrant. I mean, is it hard to look at him and say, ‘I want you kicked out’? You know, ‘I want the Trump plan that would lead to you being removed’?”

My stomach dropped. I could feel myself shrinking. I wanted to walk out of the interview. To this day, I don’t know how I managed to stay seated.

But I was seated right next to her. We were sharing a table.

At the moment, the only thing I could do was turn toward her and acknowledge her pain.

“I’m really sorry about [your loss],” I said. “[We’re] at the mercy of congresspeople, Congress members who haven’t done anything.”

“It’s not up to Congress to do something,” Wilkerson said. “It’s up to you to get in line and become an American citizen.”

She said with such certainty you’d think it were that simple. Get in line. Become a U.S. citizen. Done. She believes it’s so simple because the mainstream news media, of which Fox is a part, has perpetuated that false narrative for decades.

It’s difficult to overstate the role Fox has played in framing the public’s understanding of immigration. No other news channel has dominated a single issue the way Fox has molded immigration. Though not everyone watches Fox, it’s been the most-watched cable news channel for more than 16 years, shaping the perception of immigrants and our families, especially for people who have no direct interaction with us and know us only through the media they consume. Anti-immigrant organizations (the Federation for American Immigration Reform, the Center for Immigration Studies and Numbers USA, among them) have become sources for other mainstream news outlets, too, which rely on the leaders of these groups for their so-called “expertise” so that the outlets can claim “balance” in their reporting. These well-funded, well-organized, anti-immigrant groups command the right on a level unmatched by progressives on the left who struggle to come up with a unifying and accessible message.

On Fox, “illegals” are cast as enemies, a collective “burden” to society, “draining” public programs and stealing jobs from native-born Americans. We are the criminalized and criminal Other, thoroughly un-American, and unwilling to become American. All the talk of criminality has clouded the reality that there is no process for millions of undocumented people like me to adjust our status. Immigration is not a not-size-fits-all issue. There’s no imaginary line for millions of people like me to get in the back of. When people order me to “get in line,” what it means, process-wise, is that I should leave the country I’ve called my home for 25 years, accept a ten-year bar for having stayed in the U.S. illegally and try to come back, with no guarantee of return. For me getting in line means either “self-deportation” or living in a perpetual state of limbo.

At first I was conflicted about appearing on Fox. I didn’t want to be just another character in their script. I did not want to be used. But my friend Jehmu Greene changed my mind. An unabashed progressive, Jehmu is a paid contributor on Fox News. She’s one of the very few black female voices on the network. “Look, it’s either you’re on Fox dismantling stereotypes about immigration in front of viewers who may call you illegal to your face,” I remember Jehmu saying, “or, you can just speak to the choir.”

“There is a law. It needs to be enforced. Close the borders. Enforce current laws and, you know, welcome to America if you come in the front door.”

“Actually, ma’am, there is no line for me to get in the back of,” I said to her. I told myself: Look her in the eye. Don’t cut her off. Be polite. I continued: “That’s why we need for something to happen. I’ll be here twenty-three years next month—”

“Then you’ve had plenty of time,” Wilkerson said.

“If there was a process, I would have done it.”

Kelly interjected and told Wilkerson that I was brought to America — like the approximately 1 million undocumented children under 18 living in the U.S. today, according to the Migration Policy Institute. Though we don’t know the exact number of others like me — adults who were brought to the U.S. as children over time.

A few seconds that seemed like hours passed before Kelly asked Wilkerson if she favored any sort of path to legalization for immigrants like me.

“Get in line, and come in and tell us who you are,” Wilkerson said. “We have a right to know who’s in this country. So that’s the only thing I believe. You know, they’ve put themselves in harm by coming here.”

There was no time to respond to what Wilkerson said.

I wanted to keep repeating: there is no line.

I wanted to tell her that when it comes to harm, she has no idea, just like I have no idea what it’s like to lose a son. Indescribable, the harm, all around.

This essay is adapted from Dear America by Jose Antonio Vargas. Copyright © 2018 by Undocumented LLC. Reprinted by permission of Dey Street Books, an imprint of HarperCollins Publishers. 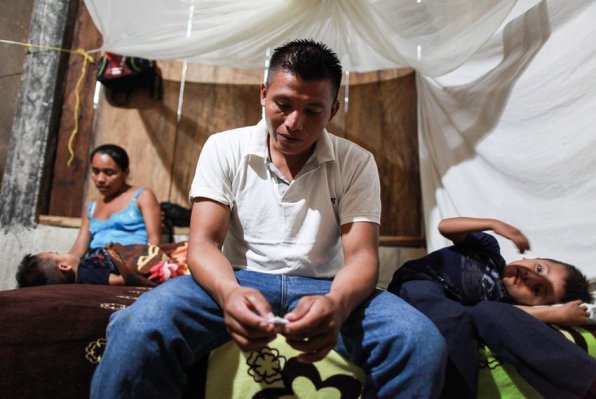 Trump's Family Separation Policy Split This Family Apart. They're Still Not Back Together
Next Up: Editor's Pick