President Donald Trump pledged to “drain the swamp” in Washington, D.C., but his Administration has been beset by ethics scandals both big and small.

Now, one of his potential opponents in 2020 has put together a detailed legislative proposal to tackle a wide range of issues involving lobbying and self-dealing in Washington, some of which seem aimed directly at Trump’s indiscretions.

In an interview with TIME, the Massachusetts Democrat, who polls show is cruising to re-election in this year’s midterms, said that the bill would help Washington work more ethically and help the working class.

Donald Trump campaigned on a pledge to “drain the swamp,” how is your bill different than his attempts?

He hasn’t made any attempts since he became president. In fact, he’s been loading up the swamp. I have a comprehensive set of policy solutions that would fundamentally change the way Washington does business and restore the American public’s faith in democracy.

Your bill includes a lifetime ban on lobbying for [certain senior officials]. Some have argued that could be [challenged] on First Amendment grounds. Do you have a response to that?

I disagree. There are conditions on different jobs all the time. I believe that members of Congress ought to be willing to say, “My job as a Senator or Representative is that and nothing else. And I not only promise that I am not looking over the edge at my next, more lucrative job, I will back that up with a law that prohibits me from doing that.”

You have long campaigned on leveling the playing field economically for working-class Americans. How does an anti-corruption bill tie into that goal?

The reason this government works so well for the wealthy and well-connected is corruption. People with money and power have figured out that they can flood Washington with cash in dozens of different places and get the government to tilt in their favor over and over and over. The only way we will get a level playing field is if government once again works for the people, and that means rooting out corruption. I can even put it the way my daddy would: “ending corruption root and branch” — that’s how he would have described it.

The bill would restrict Democrats as well as Republicans from owning stock and lobbying. How would you convince members of your own party who would end up forgoing money from this to back it?

If the American people demand it, elected officials will enact it.

What role do you think stricter regulations on lobbying and ethics should play in the 2020 presidential campaign?

I think the fundamental question in the 2020 campaign will be who government works for. Corruption in Washington is right in the heart of that question.

Is this bill a sign that you’re considering running for president in 2020?

No. This bill is a sign that we need to make Washington work for the people, and I’ve got an idea of how to do that. I’ll be out there fighting for this bill every single day.

You said in earlier interviews that this bill was a common sense solution to corruption. Why do you think it has taken so long for this kind of legislation to be considered? 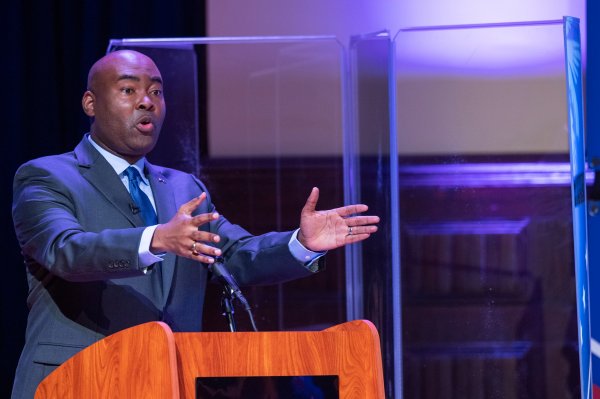