Why Jeff Bezos' Philanthropy Plan Is Well-Intended — and Misguided

“Where’s the good in the world, and how can we spread it?”

This was the question anchoring the approach that Jeff Bezos, the world’s richest man, laid out last week in announcing his and his wife’s entrance into mega-philanthropy: a $2 billion gift to address homelessness and education. The Bezoses want to fund capable organizations serving the homeless on the ground and to build a network of private, full-scholarship Montessori-like schools for poor children, who will supposedly be treated like customers are at Amazon, where the Bezoses amassed their $100 billion-plus fortune.

As soon as I saw that question in their announcement, I knew that yet another highly original, daring magnate had succumbed to the clichés and tragic limitations of American billionaire giving.

The question about spreading what is good reeked of an approach borrowed from the business world — where things are pilot-tested and scaled. That approach can be worrisome when applied to social problems. It is generous to want to grow what’s good. But that smiley-faced, can-do, focus-on-the-bright-side, entrepreneurial, solutionist orientation is often accompanied by a willful blindness toward systems, root causes and the distribution of power. Many of America’s most urgent social problems are not the result of good spreading too slowly, but rather of harms being perpetrated: employers exploiting workers to fatten their bottom lines; plutocrats using their political clout to secure tax policies that benefit them at most people’s expense; the affluent clinging to zoning and education policies that hoard opportunity rather than spread it. Many Americans on power’s bad side don’t need the winners to scale up good works. They need the winners to stop standing on their necks.

Five years ago, that might have been a radical claim. But the Bezos gift comes at a moment of backlash against big tech and of reckoning within the philanthropic complex. These phenomena are themselves symptoms of a wider questioning of the role of America’s winners in an age of extreme inequality, democratic decay, and innovation that fails to deliver broadly shared progress. For a winner wishing to do good, this is a moment to ask oneself hard questions before just writing checks and rolling up sleeves.

Is the solution to our winners-take-all economy lavish giving by the winners — or reforms that would force winners to take less? Is it better to run a business pitilessly, paying low wages and avoiding taxes and, after gaining wealth, giving back — or better to pay workers and taxes fulsomely and perhaps end up with less to give away?

Are the skills and values and spreadsheet prowess that built our lopsided new economy the best instruments for guiding the search for a fairer one?

It is important for super-winners like Bezos to ask these questions, because ours has been an age of not just elite generosity but also elite predation, with the benefits of the future monopolized by the few. And when the winners set out to give and help and make change in ways that emphasize spreading what is good, they often ignore their own complicity in the problems they seek to solve.

Which is why I’d say to elite givers, with apologies to Jack Kennedy: Ask not what you can do for your country. Ask what you’ve done to your country.

Consider the issue of homelessness in Bezos’s own backyard of Seattle. While it is laudable to support organizations providing urgent relief, the issue, there as elsewhere, has root causes. One of them is the desire of many affluent Seattleites to keep their neighborhoods zoned for single-family homes. Here the spreading-good approach isn’t enough, for the problem is some people standing in the way of others having a decent life — the obstructers, including, one presumes, the kind of people who work at Amazon. That’s not a fix that needs scaling; it’s a fight that needs picking, and it may require a certain amount of self-interrogation.

There is also the question of how much money the local city government has to solve the homelessness problem through legitimate tools of state, rather than through the more feudal dynamic of elite charity. And, again, spreading what’s good is easy, but looking at oneself is harder. When earlier this year the Seattle City Council voted unanimously to raise taxes on large employers in order to raise $50 million for homeless services and affordable housing, Amazon joined with the local business community to lobby for the repeal of the so-called “head tax” of $275 per employee. And the business lobby did succeed in getting its repeal. Now Amazon is inviting America’s cities to bid on hosting its second headquarters, including by offering the company enormous tax breaks. That is asking for money that those cities could instead be spending on the disadvantaged.

Perhaps most pertinently, there is the issue of how Amazon, like many employers in America today, pays and treats its workers. A recent investigation by The Guardian “revealed numerous cases of Amazon workers suffering from workplace accidents or injuries in its gigantic warehouse system and being treated in ways that leave them homeless, unable to work or bereft of income.” The company’s low wages, ultra-fast pace and reliance on seasonal workers, as chronicled in Jessica Bruder’s book Nomadland, contribute to a rising precariousness in the lives of working-class Americans that often manifests in homelessness. Spreading what’s good is kind. But Bezos and Amazon perhaps have even more influence over the issue by changing their own ways — and persuading others like them to follow suit.

If the winners of our age were to ask themselves these hard questions and begin curbing their complicity in the problems they seek to solve, they would end up with less money to give away. More of that money would go to wages, benefits and taxes. More of it would go to preventing ailments so that we need not palliate them later.

And yet for now we live in the world we live in, Bezos and his wife have that money, and they want, nobly, to give some of it away to help people. How could they spend the next $100 billion-plus in ways that are more imaginative and transformative than the early method they announced?

As an icon in corporate America who commands the respect of boardrooms, Bezos could support those working to make American capitalism responsive to all who are impacted by a business, not just shareholders. For years, B Corporations have offered a voluntary way of certifying one’s company as socially responsible and respectful of environmental, social and worker needs. Republicans and Democrats alike have supported the passage of state laws enshrining the benefit-corporation approach. What remains to be done is getting the remaining more than 99 percent of companies to serve stakeholders, through a mix of suasion and new laws. Bezos could play an important role in solving one problem at the root of so many problems: getting companies to work not only for investors but also their communities.

On the issue of education, Bezos could lend his support to some of the lawsuits winding their way through American courts, challenging the constitutionality and legality of funding public schools unequally, by local property taxes. That would be taking on an issue at the root. And it would be working through the machinery of law rather than creating unaccountable islands of billionaire-funded schools and programs. It wouldn’t merely be “giving back,” but forcing winners to give something up, because a victory on that issue could lead to his fellow elites surrendering to a national pool the educational funding they now ring-fence for themselves. It could diminish home values in rich neighborhoods. Such work by Bezos would still raise questions about how much power billionaires should have in shaping public life, but it could be structured to put local organizations at the forefront and be that rare philanthropy that limits one’s own power.

Imagine if Bezos applied himself to the very problem on which his fiercest critics attack him: the treatment of workers. Unions and collective bargaining have been bludgeoned in recent decades by a war waged by the political right — and by a new economy that has made the traditional union offering less relevant to many workers’ situations. Collective bargaining needs to be reinvented for the age of Uber, the gig economy and, yes, Amazon. We need to restore to workers the leverage to fight for wages that would restore the viability of the American Dream; for insurance against the vicissitudes of volatile pay and hours; and for health, safety and dignity on the job no matter how many sub-contractors of sub-contractors are hired to give a company deniability. What if Bezos, clear-eyed about his record and perhaps his regrets, backed this work, not by creating his own top-down programs but by donating money, no strings attached, to outfits like the Workers Lab, in Oakland, and the National Domestic Workers Alliance, in Chicago, that are building power for workers?

Like so many who did well and now wish to do good, the Bezoses have their heart in the right place. But their approach could benefit from an infusion of the audacity and self-interrogation that it took to build Amazon. When he was building it, Bezos never seemed to accept the outside world’s definition of the possible. If he can bring that spirit to philanthropy, he can abandon the familiar path of giving back in ways that sustain the very problems the giver takes on. He could go down in history as an unlikely reformer. 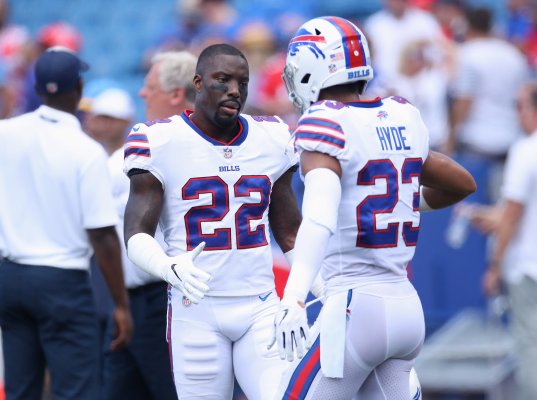 Vontae Davis Retired From the NFL at Halftime. Good for Him.
Next Up: Editor's Pick